French gastronomy might be famous worldwide, but we’d like to bet that South African cuisine has more richness, diversity and inventiveness than Le Cordon Bleu could ever dare to imagine. And while certain favourites like malva pudding and Peppermint Crisp tart are widely celebrated, there are plenty of dishes that remain a secret known only by the community who created them – and those lucky enough to be invited to dinner! At Maker’s Landing, a food incubation hub at the V&A Waterfront, curator Hannerie Visser worked with food anthropologist Anna Trapido and exhibition stylist Ilana Swanepoel to try and change this.

“We started off thinking that a hundred was quite a lot, and we very quickly realised it wasn’t enough!” says Anna of the process of curating the exhibition. 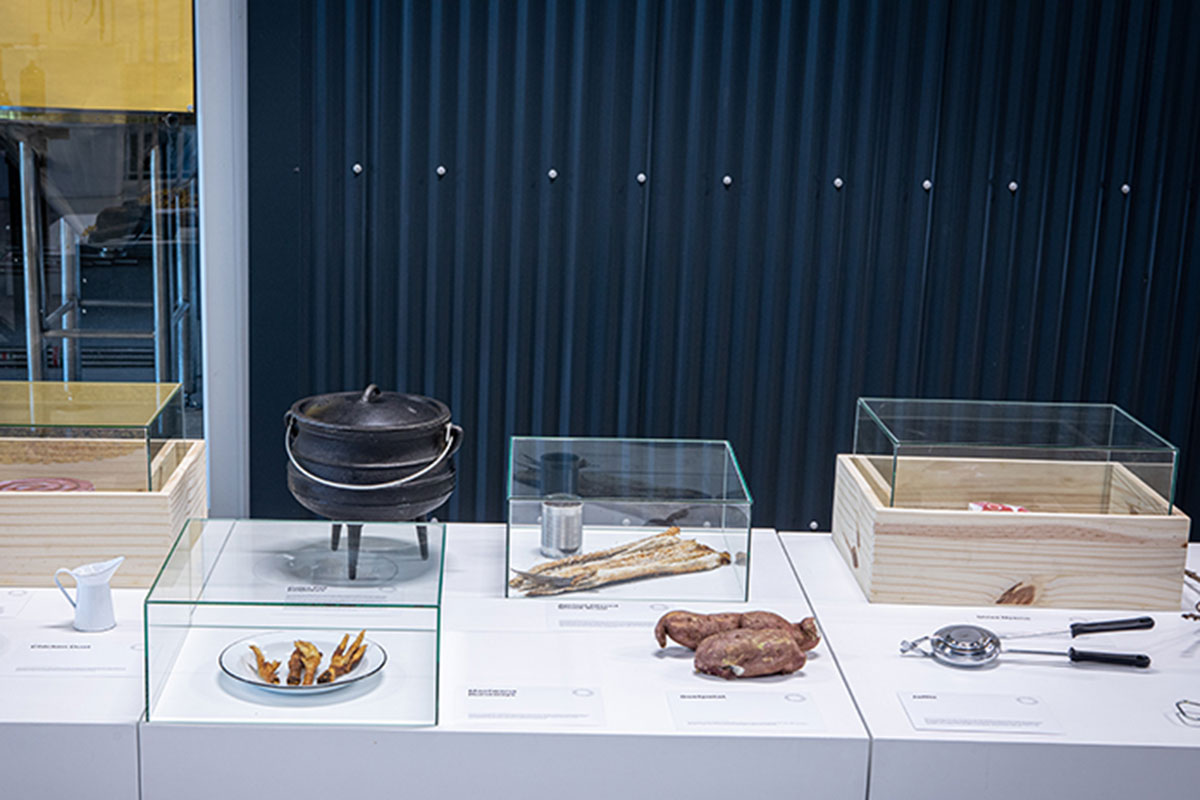 If you count the exhibits, you’ll discover there are slightly over 100 flavours, because they simply couldn’t edit out some of their favourites. “The aim was not to get a definitive hundred. We were looking for a discussion rather than a definitive list. We actually don’t need 100 – we need an archive!” 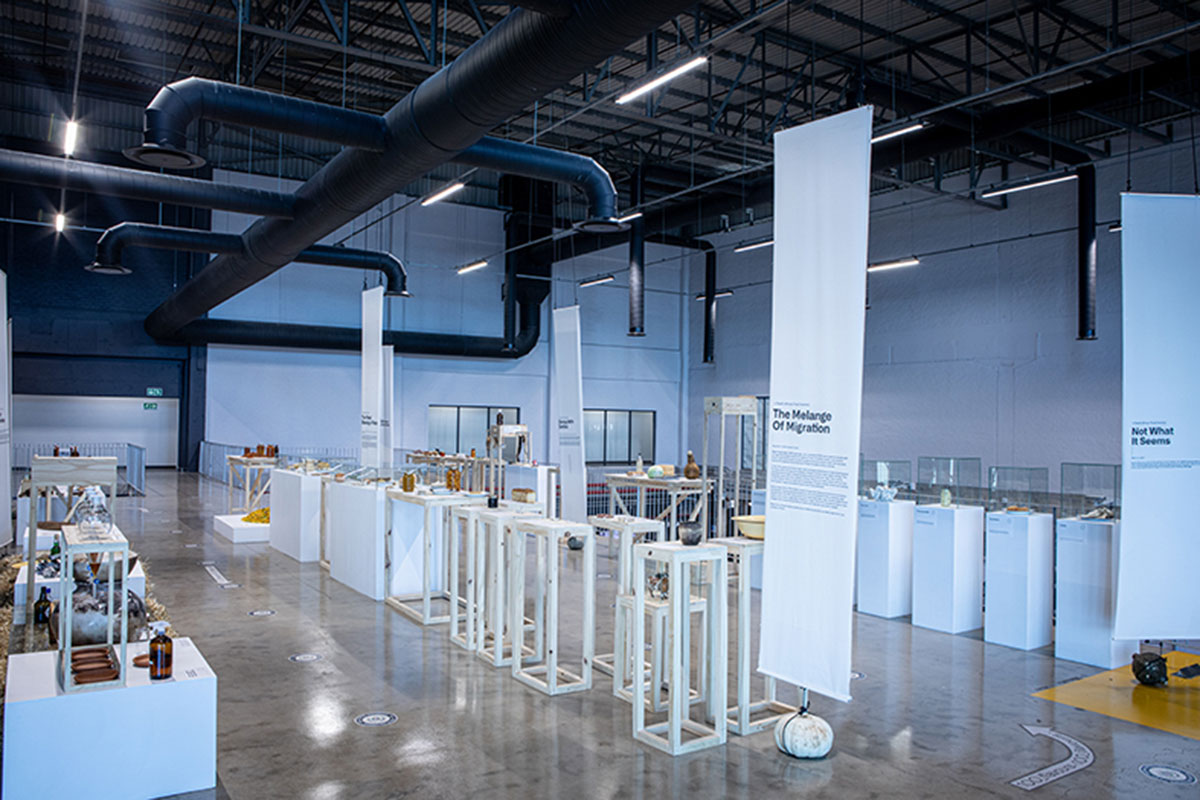 The full exhibition will be available to view until the end of 2021 at Maker’s Landing, the new food hub and market at the V&A Waterfront’s cruise terminal, in Cape Town.

Here’s a small taste of what to expect – 10 lip-smackingly good flavours. How many have you tasted?

This colourful popcorn is a popular Johannesburg township snack, it is also known as rainbow popcorn and ouma se tande (granny teeth). Generally found at taxi ranks and intended to be eaten on the move. Generally the plastic packets contain a red, yellow, blue, green popcorn mélange. The different colours all taste the same.

No trip to Durban’s beachfront is complete without making a stop at the spicy pineapple vendor! The friendly smiles of the vendors, the contrast between sweet and heat and the unavoidable sticky pineapple juice dripping down fingers is a fond memory shared by locals and visitors alike. While the sweet, tangy juiciness of the pineapple is a welcome reprieve to the summer heat, the bite of the masala chili, cinnamon and salt reminds you that this is not your average pineapple, this is a Durban pineapple. 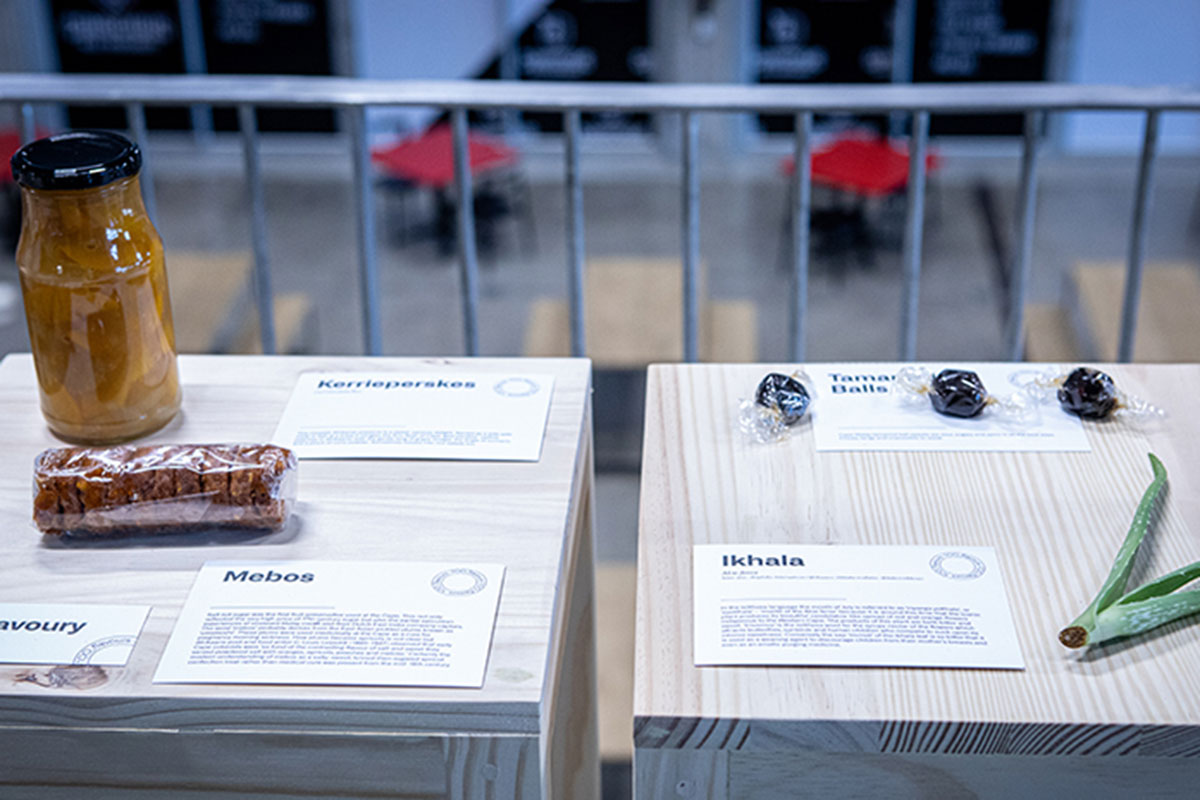 Limpopo’s shield-shaped edible stinkbug (thungulifha or thongolifha in Tshivenda) are best caught live and soaked in water so as ensure that they release the contents of their potentially malodourous and bitter smell glands. They are then boiled, sun dried and either served as meat with ‘mutuko’ (sour porridge) or fried, tossed in salt and served as a bar snack – which is wonderful because they are also said to be a cure for hangovers.

Thungulifha are the Marmite of the local insect world. South Africans either love them or hate them. They are a sought after traditional food amongst the Vhavenda who rave about their high protein content, adore their herbal flavours and generally describe the smell as fragrant rather than stinky. Non-fans include the Pedi people who refer to them as ‘podile’ (which roughly translates as ‘it is rotten’). The Pulana people of Mpumalanga describe them in Sepulana as ‘tsonônô’ which means ‘he farts, he is fat’.

This Tsonga-style slightly sweet, deeply delicious roast corn and peanut snack is a major labour of love to prepare. Pounding and sieving occur multiple times over many hours until a fudge textured treat is formed. It is traditionally given to Vatsonga bride grooms at the conclusion of the lobola (bride price) negotiations. It is said to include love potion. It would be impossible not to love anyone who gave you a bucket of xigugu…

Jodetert is a tiered biscuit and custard cake with six full layers plus an additional crumbled layer as garnish. Jodetert directly translates from Afrikaans as ‘Jewish tart’ but is currently almost completely unknown amongst South African Jews. Rather it is an icon of Afrikaner kerk bazaar church fund raising efforts.

Jodetert’s recipe precursors arrived in South Africa between 1880 and 1910 with the approximately 40 000 Jewish immigrants from Lithuania and Russia. It is a variation on the Russian Tort Medovik (known as Tortas Medutis in Lithuania). Many of the new arrivals lived and worked amongst rural Dutch/Afrikaner communities. In such situations recipes are often absorbed into the broader culinary context. Originally the seven layers were made to represented the Shivat Haminim, Seven Species of produce for which the Land of Israel is praised in Deuteronomy 8.8, the seven days of Creation, the seven laws of Noah and the seven times Israelites encircled the walls of Jericho before they fell. While the cake fell out of favour and has now been almost entirely forgotten by Jewish South Africans it has remained popular with Afrikaner bakers. 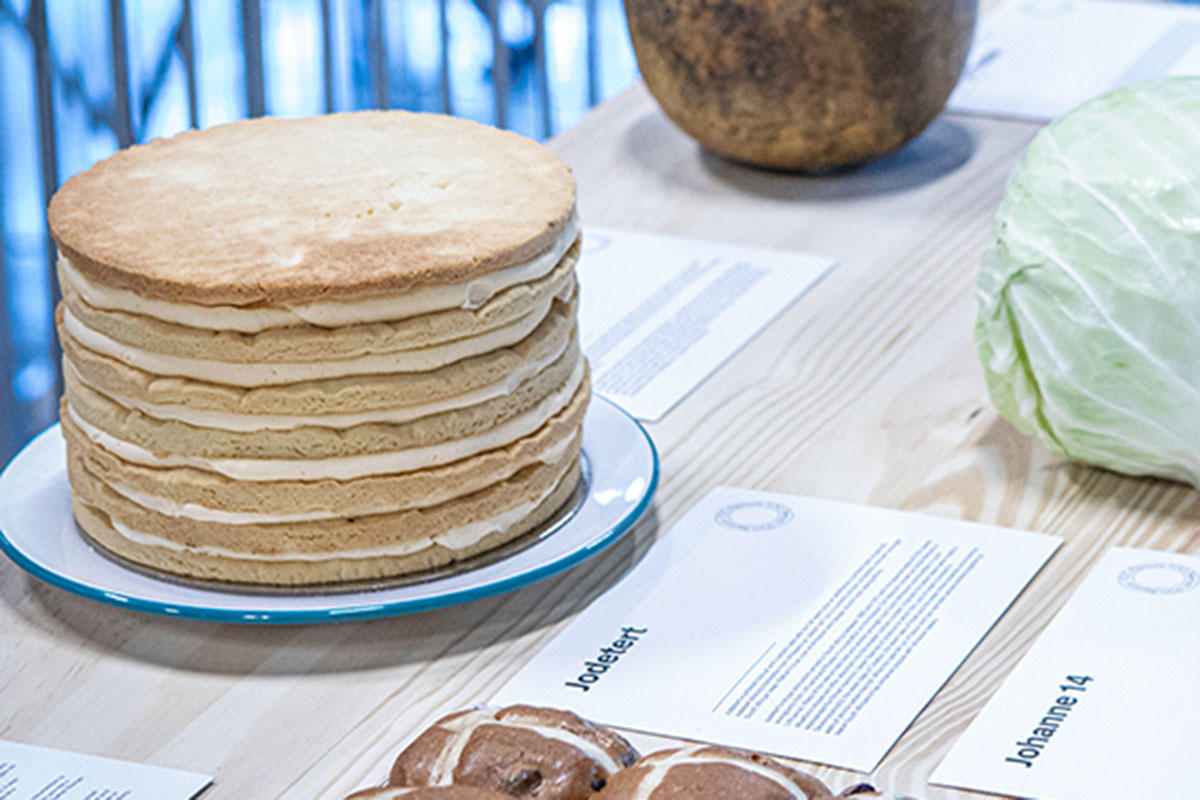 The direct Afrikaans: English translation for slaphakskeentjies is ‘small floppy heels’ which seems strange since it is actually a dish of small onions in a distinctive egg enriched, sweet, sour mustard sauce. One explanation for the peculiar moniker is that it is derived from the Dutch phrase ‘slap hakke’ which means without energy/intensity and may refer to the way in which the small pickling onions are boiled until they are soft and thus without some of their original harsh flavours. Not only is this salad not floppy and full of heels but it also a magnificent accompaniment to meat.

Tameletjies (sometimes called ‘stick jaw’) are Cape Malay style toffee treats classically sprinkled with pine kernels (‘dennepitte’). Traditionally wrapped in buttered paper packets (‘kadoesies’) and sold by Cape Town street vendors. Grated nartjie peel may be added instead of/as well as the pinenuts. In dry years pine kernels can be substituted with soaked dried peas and this variation is referred to as ‘ertjie-tameletjies’. Chikki is an Indian community version within which pine kernels are replaced by pistachios and slivered almonds. Due to its stickiness, the word ‘tameletjie’ is also used to describe a sticky or tough situation from which it is impossible to escape.

Maotwana (meaning feet in Setswana) grilled chicken’s feet are also known as runaways and some old people still call them Zola Budds! The central, palm portion inside each foot is the meatiest part of the meal. Patient people cook moatwana long and slow in a pot until the bones are soft and the meat is stickily delicious. Hurried commuters often buy them grilled and spicy on street corner braai stands.

These paper thin, round cinnamon, sweet wine and dried nartjie peel spice flavoured wafers are traditionally baked in a folding, iron pan called an oblie-yster. Vintage pans had engraved flower or leaf pattern, which decorated the oblietjies. Because the oblie iron was used on an open fire, it had a very long handle. In recent years this pretty but cumbersome pan has fallen into disuse and they are now generally baked like brandy snaps in the oven. No iron mold means no pretty patterns. With or without the oblie iron, the wafers are pressed into horn or cylinder shapes while warm and filled with cream.

Foodie folk history has long held that oblietjies came to the Cape with 17th century French Huguenot – legend has it that the biscuits are so named because the waffle iron resembles the Oubliette (‘forgotten room’) circular prison pits in which Hugenots were incarcerated before they fled to the Cape. As is the case with many legends, this tragic tale is contradicted by historical fact. There are many Dutch recipes for Oblietjies (in Holland and at the Cape) that pre-date the arrival of Huguenots in South Africa.

Cape Malay funeral food. This classic mutton, potato, pea and carrot casserole may have its roots in an Irish stew but it is also laden with local flavour. Grated nutmeg, cloves, chili and allspice abound. Serve with rice or rotis, blatjang and sambals.

Visit the full 100 Flavours exhibition at Maker’s Landing, a new market and food incubation hub based at the V&A Waterfront’s cruise terminal.

Read more about some of the vendors and food on offer at Maker’s Landing, including doughnut burgers and chicken wings by Side Wing, Indian street food by Kapoochka and modern Zulu restaurant Emazulwini.

TASTE's head of digital content is an adventurous, if somewhat haphazard cook. Her favourite recipes are all either cake, curry, or risotto, and she is an expert at hiding vegetables in unexpected places, to outwit her veg-hating toddler and husband. 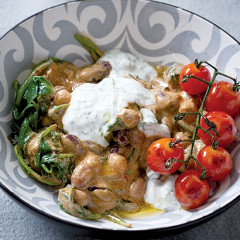 To a saucepan over a medium he… 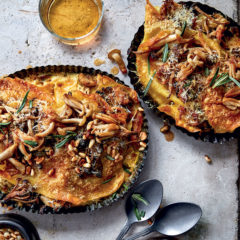 Pan-fry the portabellini and b… 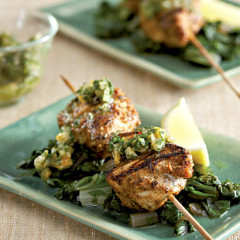 Cut the chicken fillets in hal…