If you’re looking for fast, flavourful dinners, take a look at the create-your-own stir-fry range now available at Woolies. It includes a huge variety of products including stir-fry veg bases, noodles, sauces, veggie sides (“booster” packs that can be added to any meal) and flavoured butters. Pick a veggie base (try the julienne or bright-and-crunchy stir-fry), then add noodles – egg, soya or veggie – and a sauce. From Thai coconut to sweet and sour, a chunky herb or Asian sesame sauce, they’ll all amp up the flavour. Top up with some extra veg if you like (that’s what the veggie packs are for), and add a final kick of flavour with a flavoured butter, such as soya-and-sesame or caramelised onion.

For the cauli-couscous and pork rashers: Fry 4 pork rashers until golden and set aside. Toss 380 g cauliflower couscous in 100 g caramelised onion vegan butter, to heat through and mix through 2 sliced spring onions. In another wok fry 375 g brown mushroom stir-fry until tender and crisp. Serve hot with extra spring onions and fresh basil and coriander.

For the 15-minute green bowl: Fry 375 g crisp and crunchy green veggies until cooked but still crispy. Toss the 300 g baby marrow noodles in 100 g chunky herb pesto and allow to marinate in the flavours for 5 minutes. Top with hot 250 g Tenderstem, baby marrow and red cabbage pack and they will naturally wilt the baby marrow noodles below for a tender delicious side dish.

For the crisp tofu noodles: Remove 350 g tofu from its packaging and drain on paper towel. Break it into large chunks, about 3cm big. Mix together 1/4 cup soy, 2 T rice vinegar and 1 crushed garlic clove. Place the tofu in the soy mixture and allow to marinate for 10 minutes. Place 100 g flour in a bowl and season. Place 1/2 cup aquafaba in a bowl and 1/2 cup sesame seeds in another bowl and season with salt and pepper. Remove the tofu from the marinade. Dip each in the flour then aquafaba and then coat in the sesame seeds. Place a pan over a medium heat with a drizzle of cooking oil. Fry 250 g edamame, green beans and baby corn pack in a wok until cooked toss with 100 g Woolworths sesame sauce. Melt 50 g black sesame butter and toss through soy noodles through to heat, serve with warm veggies, crisp tofu and chilli. Use extra Sesame Asian sauce for dipping. 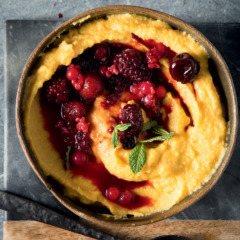 Boil the pumpkin in enough wat…

Boil the linguini in a large s… 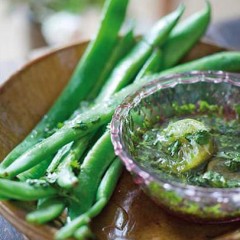 Eat to thrive! The Jan/Feb issue of TASTE is fille

These oven-toasted ham-and-cheese sandwiches are r