This Rhône Valley wine varietal was once widely planted in South Africa, but in the 1970s it went from hero to zero. Large yields turned it into the Cape’s workhorse red grape, which was used to make simple wines and became the mainstay of cheaper blended reds (yep, we all have our Tassies memories). Large tracts were pulled out to make way for more fashionable varieties such as Cabernet Sauvignon, Merlot and Shiraz.

But lately there’s been an exciting revival thanks to a wave of young-gun winemakers who have discovered the potential of old bush-vine Cinsault. It’s now being appreciated for adding femininity, perfume and softness to blends that contain more masculine varieties such as Cabernet Sauvignon, Grenache and Carignan.

If you’re looking for a red that’s light, fruity and easy to drink, Cinsault is for you. The raspberry, redcurrant and cranberry flavours will have you licking your lips, while the palate is elegant and well-rounded.

Generally speaking, game fish, poultry, pork and veal are good matches for Cinsault, but it would be dominated by heavier red meats.

A lightly textured wine with dense fruit concentration as a result of being made from very old, low-yielding Swartland vines.

Expect typical redcurrant and red cherry flavours, with a hint of black olive and black spice. A juicy, ripe fruit palate suggests sweetness, although the wine is dry.

Cool, because Waterkloof says that’s how it should be served (it’s also from the slopes of the cool Helderberg mountains). This one comes from 40-year-old bush vines and is made with minimum interference.

Look for red and black berry fruit on the bouquet and enjoy a palate of layered fruit, a rounded velvety texture and a lingering finish. Sangiovese comes from central Italy, especially Tuscany where it is the predominant grape in the ever-popular Chianti, and the only grape allowed in the famed Brunello di Montalcino wine.

The name comes from the Latin sanguis Jovis (blood of Jove/Jupiter) and it’s the most widely planted varietal in Italy, with growing interest in the new world. There are only 13 South African Sangioveses listed in the 2015 Platter’s Wine Guide but a lot of new plantings are happening, so watch this space. Try these local examples: Fairview, Idiom, Antonij Rupert and Terra del Capo.

Expect it to be light in colour and medium-bodied with high acidity and firm tannins. It will be savoury rather than sweet: common flavours are red plum, raspberry, sour red cherries, black olives and cloves.

Made near Ortona, a small scenic coastal village in the province of Abruzzo, this well-priced, lightly wooded, fruit-filled wine is a perfect introduction to Sangiovese.

It’s a deep ruby colour with classic Sangiovese flavours of leather* (see bizarre wine flavour opposite), cherry and cranberry on the nose, and a velvety smooth palate with soft but firm tannins. Best enjoyed within the next two years.

Food match: Goes perfectly with a quattro stagioni pizza or a bowl of spaghetti Bolognese at your neighbourhood trattoria.
Woolworths price: R74.95

Chianti is Italy’s best-known wine worldwide and this one, which comes from the Rufina region, contains 92 percent Sangiovese.

The wine is unwooded and aromatic with a floral perfume and raspberry, red cherry and pomegranate fruit. There is a touch of black fruit on the palate and the finish is ripe and dry. Drink it now but it could be cellared for three
to four years.

Malbec comes from south-western France, where it is the main grape in the Cahors wine region and one of the six grapes allowed in the blending of red Bordeaux wine.

In 1868 it was planted in Argentina, where it has become so popular that it currently makes up 75 percent of the world’s Malbec. Argentinian Malbec is generally ripe and fruity, while in France it’s more savoury with black pepper
and spice.

South African Malbec is made in the Bordeaux style: a rich purple/violet colour with good acidity and firm, dry tannins. Expect blackberry, black cherry, pepper and clove with strains of chocolate.

Malbec is less dense than Cabernet Sauvignon, with good acidity and a shorter finish. Steer clear of rich meat dishes in favour of ostrich, veal or pork. It can develop umami flavours when you drink it with rich mushroom dishes.

Diemersfontein is known for its coffee Pinotage and you may even find a trace of coffee in this wine, but you will be more impressed by the blackcurrant, mulberry and ground black pepper on the bouquet.

The palate is sumptuous and smooth with some vanilla (14 months in French oak) and a long-lasting finish.

Dirkie Morkel of Bellevue describes his Malbec as falling between a Cabernet Sauvignon and a Merlot.

You will find the blackberry and cassis of Cabernet, along with the soft, ripe plum and chocolate of Merlot. Great texture on the fruit-rich palate and a smooth, long finish.

Food match: Serve with butterflied leg of lamb with rosemary and garlic cooked over an open
fire and accompanied by crisp roast potatoes.
Woolworths price: R99.95 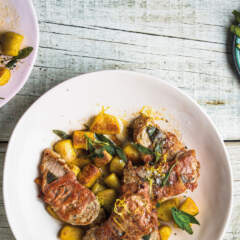 1. Cook the gnocchi according … 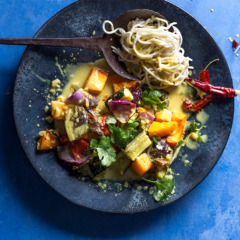 Heat the coconut oil in a sauc… 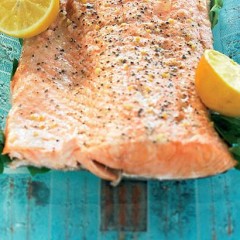 Brush the salmon with melted b…