This popular Japenese dish is a warm, brothy bowl of noodles, flavoured with soya or miso and topped with sliced pork, duck, tofu or dried nori. It’s often seasoned with black pepper, butter, chilli, sesame seeds and crushed garlic and finished off with the iconic perfectly boiled egg.

While the origin of ramen isn’t clear (some say it originated in China, others in Japan), we know that it’s popular the world over – and definitely trending in South Africa. Traditionally, ramen recipes and methods are often well-kept family secrets.

There are five flavour categories of ramen – as well as a number of hybrids.

Shoyu (soya sauce) ramen is understood to be the oldest of the five flavour categories. It’s a clear, chicken or vegetable broth flavoured with lots of soya sauce. It’s light but tangy on the palate. Shoyu is generally topped with boiled eggs or sliced beef, bean sprouts, Chinese spices and sometimes chilli oil, and is often served with thin, curly noodles. Try the Asian poached-chicken broth recipe here.

Shio (salt) ramen is a pale, clear brothy soup made with plenty of salt that can be topped with chicken, veggies, fish or nori. Here the noodle texture, size and shape varies from region to region, but the noodles used here are often straight.

Miso is a thick paste made from fermented soya beans and salt. Miso broth is blended with an oily chicken or fish broth that creates a thicker, earthy, sweetish, hearty soup. It is typically topped with spicy bean paste and veggies such as corn, leeks, onions, bean sprouts and sometimes ground pork and cabbage. The noodles that go with this type of soup are normally thick and curly. Try the butter-bean broth recipe here.

Understand the basics? Get cracking and make your own DIY ramen right now.

Following one of the recipes above, make a stock of your choice (veggie, fish, chicken, pork or beef). Poach a few veggies (beans, spring onions, corn, pak choi, mushrooms and nori) and pan-fry some chicken, pork or duck (spiced to your liking). Boil a few eggs, cook the noodles of your choice, assemble and enjoy! 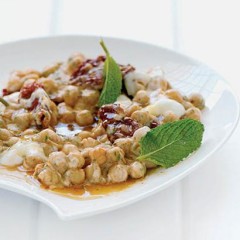 Spiced chickpeas with a drizzle of honey

Mix together the chickpeas, ch… 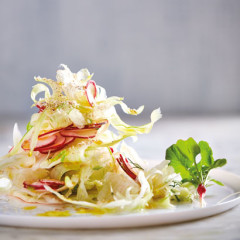 Place the fennel shavings and … 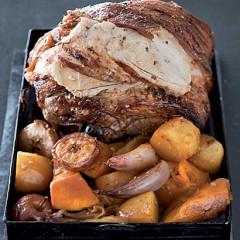