It’s not quite how the saying goes, but, often, the family that eats together, eats better. And when one of them owns a celebrated Sea Point deli and they share a passion for cooking, you know this is one Hanukkah table you have to see for the Smith-Saban family. It will always be an event – an opportunity to get together for a feast. “We are a family-oriented community and see each other at least once a week, no matter what,” says Sababa founder and owner Tal Smith, “and in Jewish culture, our gatherings are mostly centred around food.” And anyone who has ever visited her popular Mother City deli will know that her food isn’t ordinary either.

It’s a true celebration of her cultural heritage. Tal’s large family is Sephardic, with her parents Hava and Herzl Saban’s respective Libyan and Romanian origins inspiring a great deal of what she cooks. “The falafel is by far our most popular item on the menu,” she says. “The recipe was passed down through many generations and landed up in my father’s hands. He taught me how to make it. We’ve since chosen to safeguard it, but we gladly sell the falafel at the deli and even have a premix for people to buy and fry at home.”

The table is always awash with colour when Tal’s extended family gathers – including her sister Nirit, with whom she opened Sababa back in 2009, but who has since left the food industry to pursue her art career. Warm, freshly baked pitas arrive from the deli by the dozen, to be torn and dunked into spicy matbucha, smeared with smoky baba ganoush, or crammed with Sababa’s famed chopped salad, falafel and home-made pickles. The creamiest hummus in Cape Town always features, as well as crispy sesame-crusted chicken schnitzels, marinated olives, home-made labneh, and an abundance of ripe tomatoes, served in every possible form in salads and sauces.

“We’re not a hugely religious family but we are very traditional and honour all Jewish holidays. During Hanukkah, our family gets together to light candles each evening for eight days, and we eat the traditional latkes and doughnuts. As a family, we’re all really excited about food. We dream about it and we love cooking together and exchanging ideas.” On Saturdays, Tal and her team can be found at the Oranjezicht City Farm Market at the V&A Waterfront, serving their version of fast food, including a falafel bowl with salad and hummus, and their signature shakshuka. “Our loyal clientele know to follow the aroma!” she says. Sababa is a Hebrew colloquialism, which aptly translates to “awesome” or “cool”, and over the years the deli has lived up to its name and grown into so much more. It has earned its place as a culinary institution, a way of life and an appeal – or invitation, perhaps – to all of us to eat together and eat better.

Learn more about Sababa at sababa.co.za

Find the recipe for pickled beetroot and turnips here.

Find the recipe for hummus here.

Find the recipe for matbucha here.

Feel a fridge forage coming on? Khanya's recipes are the ones you need on hand. 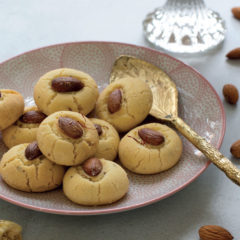 1. Preheat a Thermofan oven to… 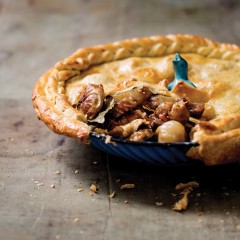 To make the pastry, place the … 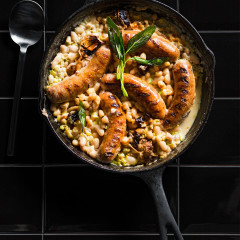 Ever had a cooking meltdown on Christmas Day? Same

Roast chicken is the gift that keeps on giving! It

Which roast is mandatory on your festive table?