Also known as Devonshire cream and mainly produced on the dairy farms of SouthWest England, this versatile dairy product is a favourite of bakers and confectioners.

Clotted cream is made by placing unpastuerised milk in a shallow pan over an indirect heat. Once warmed it is then left to cool slowly, undisturbed. After a while the cream rises to the surface and forms ‘clots’.

Clotted cream has a nutty, cooked milk flavour, with at least 55 per cent butter fat, giving it a pale yellow colour that is often topped with a deeper yellow crust.

It is an essential ingredient in Devon Cream Tea (tea with scones, clotted cream and jam), and makes a deliciously rich filling for a sponge cake, especially when layered with fresh fruit.

Though not nearly as dense, double cream makes an easy substitute. Try them on golden scones with thick lemon curd. 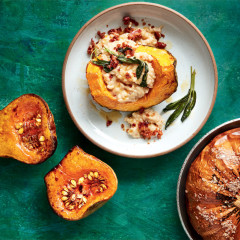 Risotto-stuffed squash with Parmesan and pancetta 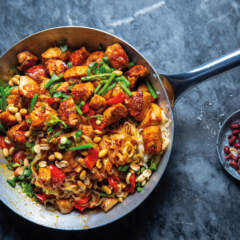 1. Marinate the chicken in the… 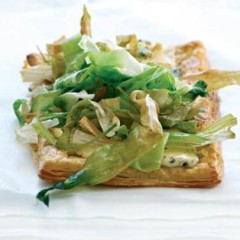