If you want to make The Cousins’ pasta at home it’s molto importante not to use dried pasta, says Simone, only fresh. First prize goes to tagliolini, which holds the sauce better than its wider counterpart, tagliatelle. “Al dente doesn’t apply to fresh pasta,” he adds. “I know when it’s done by the way it moves.”

Simone doesn’t dictate which thyme you should use, as long as it’s fresh and you have a light hand when adding it to the garlicky mushrooms. Too much will overpower the other flavours, he maintains.

As most of us don’t have a wheel of Grana Padano knocking around our pantry, a handful of the grated cheese will do. “We use Grana Padano, because it’s aged less than Parmigiano Reggiano and has a milder flavour,” says Simone. “The restaurant goes through half a wheel in about two months.”

Whatever you do, don’t use too much fresh cream. “The pasta doesn’t have to swim in it,” says Simone.

“Porcini would be the best, but at the restaurant we usually use white mushrooms as they’re more readily available,” says Simone. “I don’t like using black mushrooms because they make the whole dish black.” Hopefully we’ll be forgiven for using portabellinis …

“There’s an ongoing debate in Italy about whether you should slice or chop your garlic,” says Simone. “I chop it. and I fry it in vegetable oil, not olive oil.” Any questions? We didn’t think so. 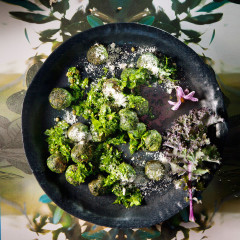 Cook the spinach and ricotta i… 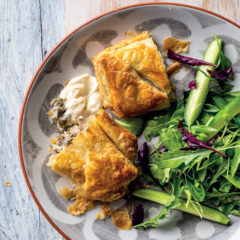 Blitz the mushrooms with the b… 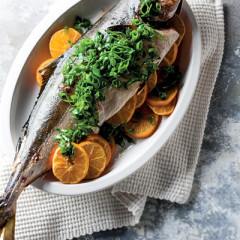