A lot has happened since the first book, Real Meal Revolution, was published. How has your philosophy changed?

So much has happened. The biggest change in my philosophy is around diet in general. I’ve seen people completely transform their lives following our advice, but I am a lot more focused on diet in general than on just one diet. Real Meal Revolution is only the tip of the iceberg. My belief (as embodied in this book) is that whatever you’re eating – low-carb or not – you would benefit most from eating real, unprocessed foods, preferably cooked by yourself or a family member. Cooking really is the key.

How does the new book differ from the first one?

I’d say the biggest difference is that there is zero science and zero dietary advice. Low-Carb Cooking (LCC) is an unadulterated cookbook. The biggest frustration with any change in eating is running out of ideas of things to make. On average there are three different recipes per ingredient and each recipe differs in texture, flavour and level of difficulty. Cabbage, for example, has a classic slaw, sautéed spicy cabbage with Indian spices and Australian-influenced roasted cabbage wedges tossed in sundried tomato vinaigrette. You’ll also find basic cooking lessons, a drinks section, and a big kombucha splash.

One unexpected upshot of the first book is the popularity of cauliflower. Which other veggies do you think are underrated?

I’m a huge fan of green beans. There’s a spicy green bean dish called garlic fried beans that has tons of caramelised garlic in it, and towards the end of the recipe you chuck in chilli flakes, soya sauce and paprika. The paprika thickens everything so you get this rich, spicy, gooey, sticky, garlic glaze all over the beans. I’ve never tasted beans like that before. The other killer bean recipe is the fasolakia ladera. It’s a traditional Greek bean dish where the beans are braised in a light tomato sauce for about an hour. They come out far from al dente but they taste like a warm hug.

But turnip skordalia was the biggest surprise to me in this book. If that recipe gets traction, turnips could be the next cauliflower… 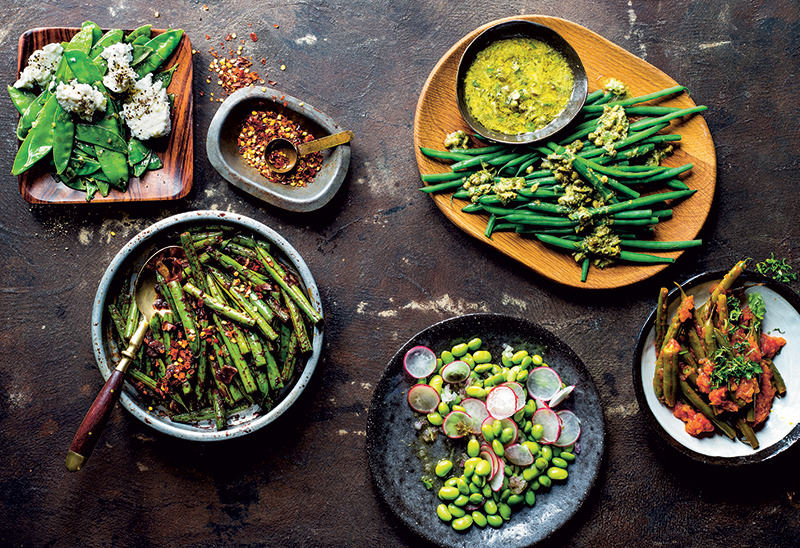 How strictly do you stick to the diet?

I’m so glad you asked this question. I hate the idea that anyone needs to be “on a diet”. In this frame of mind, you are either being “good” or being “bad”. I see low-carb eating as a tool, or a technique that we can use to lose weight. I found that once I learned enough about my body and its response to various foods, I had better control over everything. For example, I know that if I eat gluten, it will hurt and if I eat sugar, it will make me hungrier. But that doesn’t stop me from eating either of them, because I also know that if I stay away from the carbs for a couple days I’ll be back where I started. I eat gluten and sugar every weekend, but I’m quite strict from Monday to Friday. So, my philosophy is that people should use diets to educate themselves about what works for their bodies

What’s the best way to add a bit of sweetness to a dish that needs it for balance?

Start any recipe with some form of caramelised onions. I add a lot of onions and caramelised garlic to everything I cook. Caramelising anything brings out the natural sweetness, so I like to grill and BBQ as much as I can. It’s a tough one because sweetness actually increases your appetite, so it’s something we should stay away from if we’re trying to eat less.

Which recipes should we make immediately?

Definitely all three sausage recipes in the pork section. There’s one with peppers and salsiccia, banging mustard bangers and an epic stewy soup with chorizo, blood sausage and pork belly. They’re warm, rich and all packed with flavour. Berbere roasted cauliflower with tarator is a winner. I’d serve that with roast lamb or falafel. My favourite fermented dish is the all-natural fermented pickled cucumbers. There’s a natural salty, sweet and sour flavour you get from a real pickle that can’t be manufactured, and it is next level. 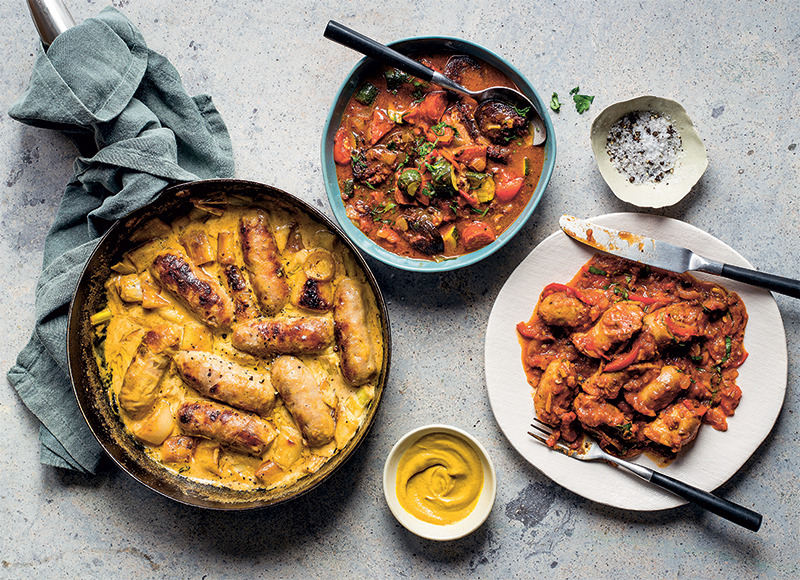 Do you have any tips for sticking to a diet when pressed for time?

At the top of the list would be – make more time. If you want to make your health a priority, you actually have to prioritise it. Secondly, I would say plan well. And, when you’re dishing up, dish up all the plates, then dish up another round straight into lunchboxes. That has been life-changing for me and my wife.

Any tips for getting kids to eat more veg?

The best advice I got was from the parenting pop classic Bringing Up Bebe by Pamela Druckerman. Apparently you need to taste a food 10 times before you get used to eating it. So I would say persistence and patience are key. I’ve seen my three-year-old daughter change her mind on a few things. We often just leave the room altogether when she’s being resistant. That said, sometimes we come back in and the dog is covered in food, so it’s not an exact science!

How do you thicken a sauce without flour?

Even outside the health sphere, I am strongly against thickening with flour or corn flour. Thickening sauces by reducing them, or stirring in lots of cold butter is the only way you should do it.
It comes down to flavour.

What’s your next challenge?

I’d like to keep writing a book a year under the Real Meal Revolution brand. But I’ve got ambitions to get into compostable packing and veganism. And I’d like to take RMR global. And obviously do that while raising my kids and enjoying my marriage. That’s more important than anything. 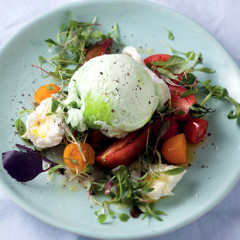 Caprese salad with a twist

Toss the tomatoes and micro sa… 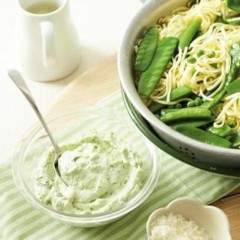 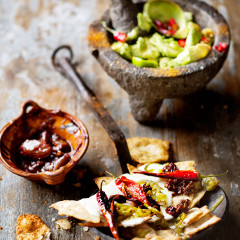 Tear the wraps into large piec…