1. YOU’LL CATCH ALL THE COCONUT FEELS

It sounds exotic and, let’s be honest, it feels exotic when you’re sitting on the beach taking in the impossibly azure ocean while sipping coconut water from a freshly cut coconut (young and green, not mature and hairy, much to my delight). But a tropical paradise offers many ways to enjoy this flavour and I was lucky enough to discover some incredible incarnations at an exclusive cooking class with chef Erryl Morel, who lectures at the Seychelles Tourism Academy in Victoria on Mahé island. He showed us how to make spicy tuna coconut curry served “family style” with saffron rice, for starters. And I, for one, will be making it again and again.

Equally delicious is the traditional island-style coconut rice spiked with cardamom which was often served with chopped herbs and cloves, as well as la daube, a local favourite that can be eaten as a sweet or savoury dish. The sweet version is a dessert made with cubed sweet potato simmered in coconut milk. Add cinnamon, sugar, cardamom and vanilla and cook until the sweet potato is soft and creamy.

But it was at my hotel, Constance Ephelia, that I found the best kept secret: coconut jam. Not too sweet and with a slightly crumbly texture, it’s delicious on toast, fresh bread or croissants. I fell so hard for it that the hotel chefs made me a stash to take home.

2. FISH AND SEAFOOD FOR DAYS

In true island style, a vast array of fish and seafood – from red snapper, parrot fish and skipjack, to octopus and lobster – can be found on Creole menus. In fact, the sheer number of options, including how it can be prepared (steamed, grilled baked, salted, wrapped in banana leaves) is both bewildering and thrilling. If you are self-catering, buy yours fresh at the Sir Selwyn Selwyn-Clarke Market (built in 1840, it’s the oldest market in Victoria), or dockside at the small harbour inlets dotted around the coast where fishermen ply their trade. 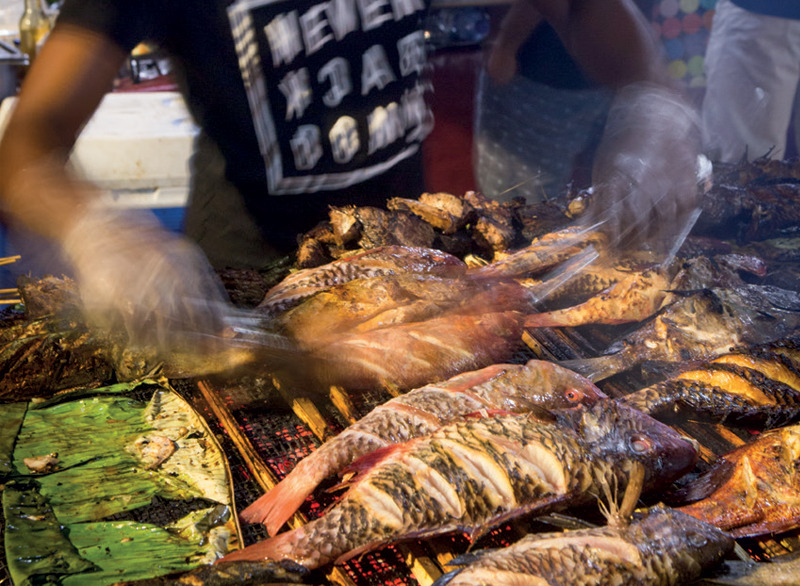 Do yourself a favour and visit the Bazar Labrin (pictured above), a vibrant night market held every Wednesday at Beau Vallon Beach. Frequented by locals and tourists, you should be prepared to haggle – the vendors enjoy a good verbal jostle. Expect fresh grilled red snapper and mackerel right off the coals, home-made black pudding, massive ripe avos, juicy yellow mangoes and, of course, coconuts. The sight and sound of locals drumming around a huge fire (occasionally drowned out by a Rihanna beat) will stay with me forever. Eat your fill, buy a sarong or two, and join the dancing – you know you want to.

3. ALL OF THE SPICES: IN CURRIES AND COCKTAILS

The islands were a hub of the spice trade in the 18th century and there’s no better place to immerse yourself in the aromas of lemongrass, nutmeg and vanilla than at Le Jardin du Roi Spice Garden, where there’s a museum, a spice shop and a restaurant. The story goes that when the spice garden was destroyed in the late 1700s, Mother Nature ensured that cinnamon seeds were carried all over the hills of Mahé, which is why cinnamon trees grow abundantly in the mountains today. 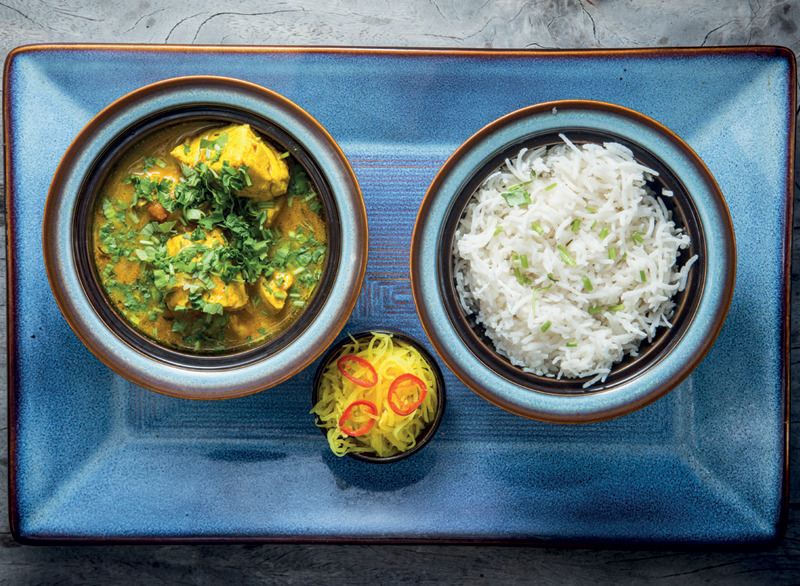 Creole cuisine draws on a huge variety of spices and using them skillfully, as demonstrated by chef Rakesh Pultee from Raffles Seychelles resort on Praslin island, can elevate a simple fish curry to something extraordinary (pictured above). In addition to cinnamon, carrypillé (curry leaf ), thyme, chilli, garlic, cloves, cumin, ginger and nutmeg are staples in most dishes. As for the cocktails … don’t miss the spiced daiquiri at La Grande Maison, which stars locally made Takamaka St André eight-year-old rum blended with Smith and Cross rum, lime, and a perfect blend of three Seychellois spices: cinnamon, ginger and curry leaves.

4. THE WILD AND WONDERFUL INSTAGRAMMABLE FRUIT

Before I tell you about the jaw-dropping produce, first a geographical fact: because of the islands’ proximity to the equator, there is no real on- or off-season for fruit and vegetables, which means most produce is available all year round.

And here’s the really exciting bit: all of it is big – much, much bigger than you’d ever imagine. Think massive mandarins, huge limes, gigantic bananas, monster mangoes and astronomical avos – you get the picture. And don’t even get me started on the exotic fresh produce I’d never encountered before.

There’s corossol, a knobbly, dark green, oblong fruit that tastes, unexpectedly, like a combination of pineapple and strawberries with a citrusy tang. It’s often used in desserts (the exotic fruit dessert and mango sorbet at Four Seasons were both sublime), and it’s a winner in cheesecake. Starfruit, dragon fruit, jackfruit and, of course passion fruit, are also everywhere. Chopped, sliced, in salads, juiced, or in cocktails, less is definitely not more when it comes to the islands’ tropical bounty.

5. THAT BOUILLABAISSE ON MAHÉ ISLAND

One of the truly exceptional meals of my trip was a sumptuous Provençal-style fish stew (pictured below) prepared by chef Christelle Verheyden at La Grande Maison, situated in the beautifully restored plantation house in La Plaine St André (also home to Takamaka Rum). A mix of grilled, poached and sautéed snapper, tuna, Captain Blanc, queen prawns and mussels was served in a glorious bisque with huge depth of flavour. I could have eaten another bowl of the broth alone. 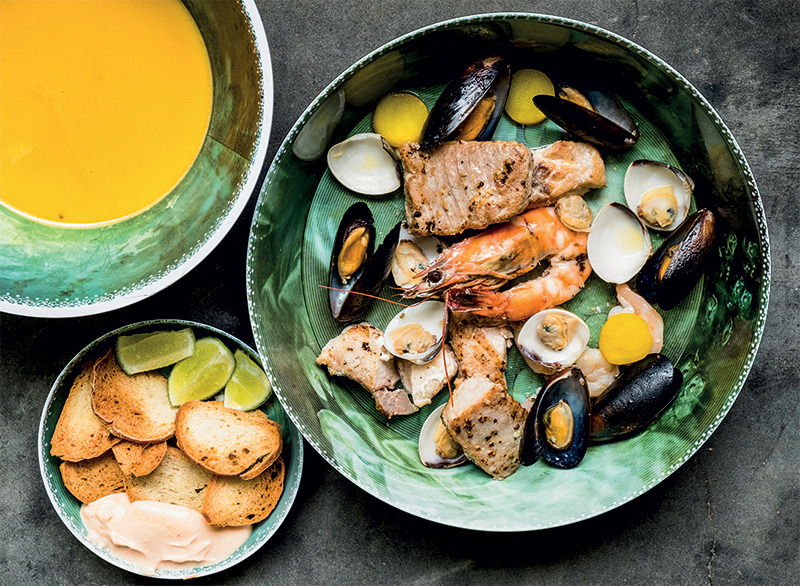 Generally, the islanders prefer their seafood cooked, so the only raw dish I encountered was a delicate tuna tartare blini, part of an impressive line-up of entrées by Christelle, which comprised an exotic fruit salad, palm hearts with truffle oil, and black pudding and chutney served with freshly baked rolls spiced with curry leaves, accompanied by a tiny pipette of olive oil for liberal drizzling. Which brings me to easily the weirdest thing I’ve ever eaten – bat pastilla.

Inspired by a traditional sweet-and-sour dish from Morocco usually made with wild pigeon encased in pastry, Christelle’s Seychellois twist features locally sourced fruit bat (ironically served to us on Bat Appreciation Day) that, surprisingly, tastes a lot like pheasant. Although fruit bats are plentiful and endemic to the islands, the dish is considered a delicacy as the star ingredient is expensive to source – the bats are caught in nets strung between trees, far away from nests, in specific areas only. Most of my fellow diners decided to give the bat pastilla a wide berth but “When in Rome”, I always say. Which is also what I said when it was time for dessert, miniature triumphs in the form of a trio of white and dark chocolate mousse (the latter with a splash of Takamaka rum), panna cotta with shaved coconut, and a corrosol sorbet (with cape gooseberry) served in shot glasses.

6. A NEAT SURPRISE AT TAKAMAKA RUM

If the only thing you know about rum is that it’s usually mixed with Coke, do not risk saying that out loud in front of Richard d’Offay, the managing director of Takamaka Rum. He prefers his rum neat, or in a chocolate mousse (made by chef Christelle Verheyen from La Grande Maison, pictured below). 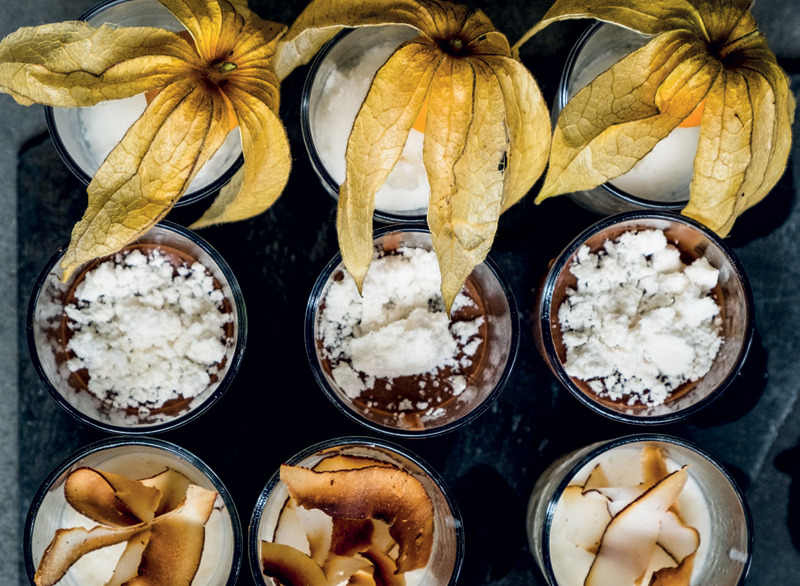 By some lucky coincidence, TASTE photographer Jan Ras went to school with Richard’s wife, Retha, in Port
Elizabeth, so we made sure to add Takamaka to the list of places we absolutely had to visit. It should be on your list, too. Richard and his brother, Bernard, started the business 16 years ago after returning to the islands from South Africa. Their parents are originally from the Seychelles and always dreamt of returning home. The business started off small and slowly – blood, sweat, tears and a couple of rookie mistakes later and they now run the only rum distillery in the Seychelles.

True Seychellois, their welcome is friendly and warm. I don’t think I’ve ever seen people so passionate about spirits, aside from myself.

About 260 tonnes of sugar cane are crushed each year to make around 70 barrels of Takamaka rum. Their signature spirit is the St André, aged for eight years in American oak barrels, which is sadly not available in South Africa. Luckily for you and I, their bestselling Spiced Rum is available here, as is the Extra Noir. They also sell delicious blends such as coconut, pineapple, and mango and passion (fruit). Take it from me – this is the perfect way to kick-start your summer.

FLIGHTS AND VISAS
Air Seychelles flies direct from Johannesburg to Mahé from Tuesdays to Sundays.
South African visitors do not require visas.
Go in October, just before the hotter rainy season, or in April or May.

MONEY
The Seychellois rupee compares favourably to the rand (1Srp is slightly less than R1). Take euros or US dollars if you prefer, but most credit cards are accepted on the islands. Petrol, data and alcohol are expensive, so buy a local SIM card or switch off (you’re on an island for a reason, right?) A SIM card will cost you 126Srp (R116) and 300MB data will cost around 99Srp (R91).

GETTING AROUND
Cat Cocos ferries will get you from island A to island B. You can also rent a car for around R1 000 per day.

WHERE TO STAY & EAT IN SEYCHELLES 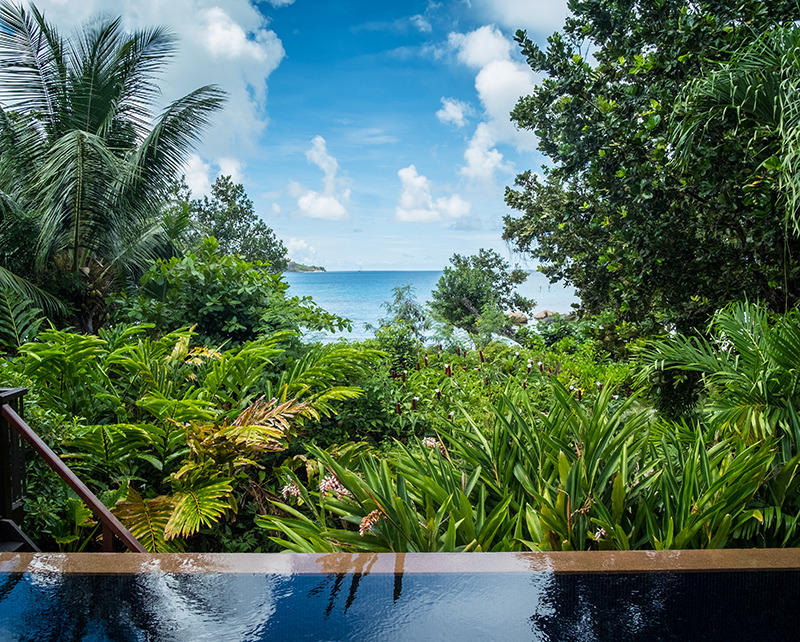 Of the 115 islands in the archipelago, Mahé, La Digue and Praslin are highlights. The ferry from Praslin to La Digue takes just 15 minutes, and Mahé and Praslin are an affordable 60-minute ride apart, so there’s no reason why you shouldn’t visit all three. 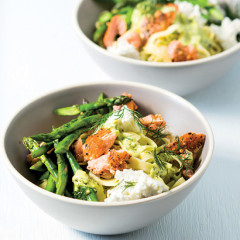 Stir-fry the asparagus in the … 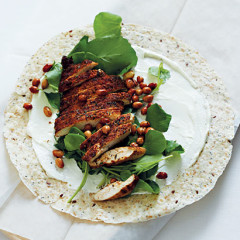 Coat the chicken with the Caju… 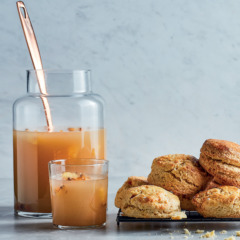