Biryani is a signature layered rice dish that is synonymous not only with Eid, but with many special occasions in a Muslim home, including weddings.  It requires quite a bit of preparation, but it is absolutely worth it and such an impressive accomplishment once you dig into it. This is a recipe my mother, Shoneez Marks, has mastered and I’m always in awe with how effortlessly she puts it together.

1. Heat the oil in a large saucepan over a low heat, then add the saffron. Allow it to crisp before removing it from the heat, then steep in a tablespoon of hot water.

2. Braise the onions over a high heat until slightly golden, then drain on kitchen paper. Set aside a pinch of fried onion to garnish the dish later. Roughly crush the remainder.

3. Place the meat in a separate bowl, then add the saffron, garlic, ginger and red chilli, ensuring it coats the meat. Add the yoghurt, tomato, spices, fried onions, lemon juice, green chillies, mint, 1 cardamom pod and 1 cinnamon stick. Set aside to marinate for at least 1 hour.

4. Meanwhile, boil the lentils in slightly salted water until cooked (be careful not to overcook them, they should still retain their shape). Once cooked, drain completely in a colander.

5. In a separate saucepan, boil the rice with the remaining 2 cardamom pods and cinnamon stick until slightly underdone.

6. Peel and cut the potatoes in half and fry until golden. Set aside and allow to drain on kitchen paper. Preheat the oven to 180°C.

7. Grease a large, flat-based, ovenproof saucepan with some of the butter. To assemble, sprinkle a handful of the cooked brown lentils into the saucepan, then top with a layer of meat. Add the potatoes and boiled eggs, then sprinkle over the remaining lentils.

8. Cover with a layer of rice, then pour over the remaining melted butter and cover tightly with foil. Place in the oven and cook for 2 hours.

9. Once cooked, remove from the oven, sprinkle with the remaining fried onions and serve immediately.

Saadiyah is a full-time working mom of two girls with a deep passion for all things baking and food. She made her first pot of food at the age of 10 and, with a growing curiosity for experimenting with different bakes, flavours and dishes, started documenting her food journey and sharing recipes on her blog Sadie’s Bubble of Yum 10 years ago. 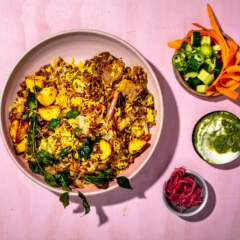 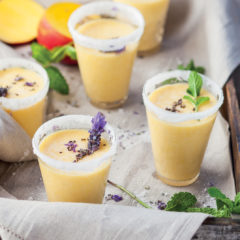 Blend all the ingredients for … 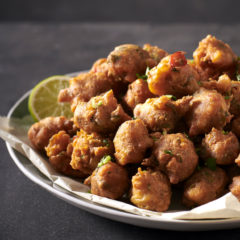