Add the egg and Parmesan to the soaked bulgur wheat and beat vigorously using a wooden spoon. Add both the quinoas and the parsley and continue beating. Season to taste.

Remove the top layer of cling film, place a blue cheese ball in the centre of the disc and gather up the sides. Squeeze it together to form a neat parcel. Repeat with the remaining quinoa mixture and blue cheese.

Deep-fry the croquettes in 180°C oil until golden, then drain on kitchen paper.

Break open a couple of the croquettes, allowing the cheesy centres to ooze out; leave the rest whole. Arrange on a plate alongside slices of pickled pear and a few leaves of wild rocket.

Drizzle with the salsa and dressing and serve immediately.

To make the pickled pears, place the vinegar, hanepoot, water, sugar and saffron, if using, in a saucepan and bring to a boil.

Add the pears, reduce the heat and poach for 10 to 15 minutes, or until they can be easily pricked with a knife. Allow to cool, then slice and remove the cores.

To make the Parmesan dressing, place the vinegar, rosemary, egg yolk, mustard and Parmesan in a jug blender and blend on a high speed.

With the blender running, slowly add the oil in a steady stream to create a creamy dressing. Season to taste with salt.

Considered a foodie visionary by most, Luke Dale-Roberts is the mastermind behind SA's number one restaurant, The Test Kitchen, as well as The Pot Luck Club. 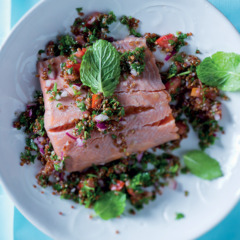 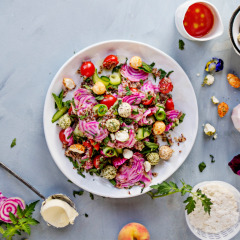 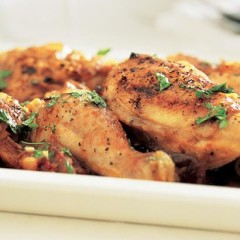