Peel and deseed the butternut. Cut it into large chunks and place it in a roasting tray.

Season it with the nutmeg, cinnamon, sugar, butter, salt and pepper.

When it has cooled add the egg, crumbled goats’ cheese and ½ cup of grated Parmesan. Season to taste.

Lay one pasta sheet on top of a clean tea towel. Brush the bottom long edge with egg white.

Lay another pasta sheet along that edge so that they just overlap (the overlap piece should be about 2cm).

Repeat this process with a third piece of pasta.

You should end up with a large rectangle.

Spread the butternut mix evenly over the large rectangle leaving a 2cm gap the length of the edge nearest you.

Brush that edge with egg white. Using the tea towel roll up the pasta towards you into a neat roulade, rolled in the tea towel.

Tie each end of the rotolo tightly with a piece of string.

Place the rotolo in a boiling water bath and poach for 40 min. Turn the rotolo after 20 min to make sure it cooks evenly. After 40 min remove the rotolo from the water and leave to cool.

Remove the tea towel from the outside before it gets cold as it will stick and tear the pasta. Once the rotolo has been removed from the tea towel it can be brushed with olive oil and refrigerated.

To serve cut the rotolo into thick slices and either heat in a pan or under a grill until golden brown.

Heat a little butter in a pan, add the pine nuts and sage leaves and fry until the sage is crisp and the pine nuts are golden brown; then spoon the garnish over the rotolo.

Garnish with the rest of the Parmesan.

Cook's note: This dish goes extremely well with a beer, such as the suggested Peroni Nastro Azzurro. Enjoy responsibly. Not for sale to persons under 18.

To learn more about food and beer pairing, click here. 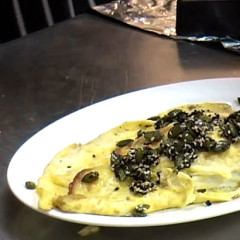 Cook the butternut in a frying… 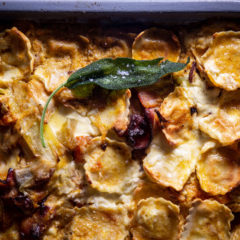 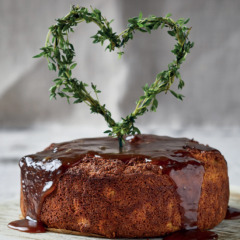