Place all the vegetables, the bay leaves, rosemary and stock in a deep roasting pan and drizzle over the olive oil.

Lay the spatchcock turkey on top of the vegetables, tuck in the wings, then wrap it in the bacon, making sure to cover as much of the turkey as possible. (Read how to spatchcock a turkey at the bottom of the page)

Brush it with the butter, season lightly and roast until golden brown, about 1¾ hours, basting with butter
every 20 minutes.

To make the Brussels sprouts confetti, cut the bases off the sprouts, then separate the leaves. Toss them in the olive oil, season and roast until slightly caramelised, about 15 minutes.

To make the gravy, brown the flour and butter in a saucepan, then gradually whisk in the turkey cooking liquid. Once all the liquid has been added, bring to a boil and season to taste.

To serve, place the Brussels sprouts around the turkey and serve the gravy on the side.

To spatchcock the turkey: place the turkey on a board with the backbone facing up, then use a pair of poultry scissors to remove the backbone. Turn it over, press down forcefully to flatten it until you hear the breastbone crack. Spatchcocking the turkey means it will cook evenly and covering it in bacon keeps the meat moist, while the bacon fat makes the skin of the bird extra crispy. 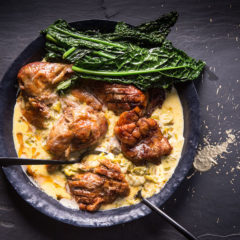 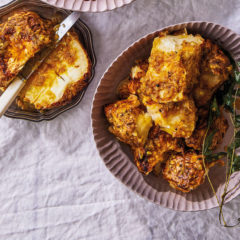 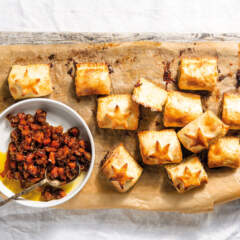