To make the white sauce, melt the butter in a saucepan. Stir in the flour until smooth. Pour in the milk and whisk until thick. Add the mustard and season. Remove from the heat and allow to cool slightly before stirring in the Parmesan.

Bring a small to medium saucepan of water to the boil and add the vinegar. Reduce the heat until the water is barely bubbling and, using a slotted spoon, make a whirlpool in the centre of the water.

Break an egg into a tea cup or bowl and carefully drop it into the swirling centre and simmer for 2–3 minutes, or until set for a soft egg (cook for a further 1–2 minutes for a harder egg). Gently remove using a slotted spoon and place on kitchen paper to drain. Repeat with the remaining eggs.

Preheat the grill to 200°C. Slice the kernels from the corn cobs and arrange on the toast on a baking dish or tray.

Top with the bacon, poached eggs and generous spoonfuls of white sauce, season and grill for 5 minutes, or until the sauce starts to brown. Serve hot with more grated Parmesan and microgreens.

Cook's note: Don’t be afraid of its restaurant-only reputation – the croque madame is a really simple and satisfying brunch, or even dinner, to make at home. Poach the eggs slightly less than you would normally as they do spend a little time in the oven.

What exactly is the difference between a croque madame and a croque monsieur?

The croque monsieur first appeared in French cafés in the early 1900s as a grilled ham and cheese sandwich with a béchamel sauce, served as a snack. The name comes from the French verb croquer (“to bite, to crunch”). When topped with a poached or fried egg it became known as a croque madame because it was said to resemble a woman’s hat. History lesson over, reward yourself with our updated recipe. 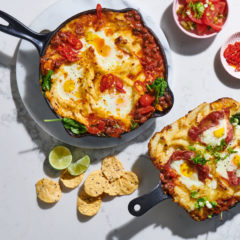 1. Mash the potatoes with the … 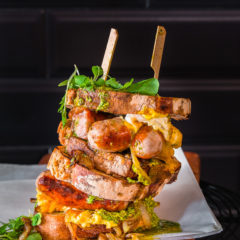 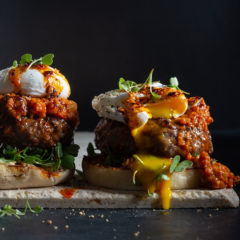 1. To make the chakalaka, chop…

When @keletso.motau tasted mandazi, on a trip to Z

Hands up if you love chicken wings? These sticky-s

Are you storing and prepping your tomatoes correct

This genius ‘slaai’ is made on the braai. @kel

Are you a die-hard tahini fan? Then you will love

Don’t spend all your time at the stove flipping

When it comes to cheese, you think…