Grease and line the bottom and side of a round 15cm-diameter, 12cm-deep tin, or use a big jam tin.

The baking paper used for the side must be 8cm wider than the depth of the tin, to contain the cake so that it becomes taller than the tin.

Soak the sultanas in rum for about 1 hour, but reserve 1 tablespoon of rum, into which the saffron (if using) is dissolved. Drain and dry on paper towel.

Pour the milk into a bowl and sprinkle in the yeast and ½ a teaspoon of sugar. Allow to stand for 3 minutes before mixing well.

Leave the mixture in a draught-free area for about 10 minutes until foamy and almost doubled in size. Beat together the butter and sugar, add the eggs, vanilla, extra rum and saff ron (optional).

Combine the flour and salt and sift into a large mixing bowl.

Make a well in the centre, pour in the yeast and sugar-and-butter mixtures. Stir until all the ingredients come together.

Turn out the dough onto a lightly floured surface and knead until smooth and elastic, about 10 minutes.

Add the candied fruit, almonds and sultanas, working them in until they are evenly distributed. Place the dough in a large, lightly buttered bowl, then cover and leave in a warm, draught-free area until the dough has doubled in size, about 1½ hours.

Punch down the dough, shape it into a ball and place it in a tin. Cover and allow to rise for 1½ hours, until it has risen to at least the top of the tin.

Preheat the oven to 180°C and bake in the lower part until a skewer inserted comes out clean, about 40 to 45 minutes.

Leave the cake in the tin until warm, then remove it.

To serve, cut the cake into horizontal slices and use the domed top crust as a lid to keep it fresh.

To make the icing, mix the icing sugar and a little water to a runny paste and pour over the cake. 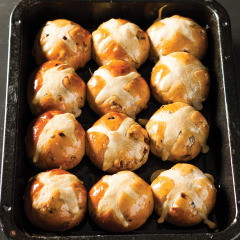 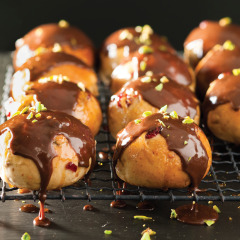 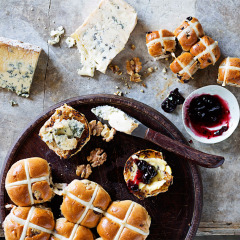 1 Melt the butter in a pan ove…