Rub the lamb with the dried chilli, cumin, fennel, salt and olive oil and roast for 45 minutes to 1 hour, or until soft and tender. Remove from the oven and cut into bite-sized pieces.

Increase the oven’s temperature to 230°C.

Heat 3 T olive oil and dice the brinjal into 1 cm cubes. Fry in the oil until golden brown. Drain on kitchen paper. Heat a little more olive oil in a pan and cook the mushrooms until soft, then season to taste.

Smear the pizza base with tomato sauce, top with the mozzarella, the lamb, brinjal and olives. Bake until the cheese has melted and base is lightly browned. Garnish with fresh coriander, sprinkle with the dukkah spice and drizzle with the mustard yoghurt dressing.

To make the pizza base, mix the yeast, water and oil. Place the dry ingredients into the bowl of a mixer, add the wet ingredients and mix, using the dough hook attachment, at a medium speed until a soft dough is formed.

Place the dough in a bowl, cover with a clean tea towel and leave to rise in a warm place until tripled in size. Shape into a ball and allow to rest for 30 minutes. Roll out to 1 mm in thickness on a clean, floured surface. Place on a baking sheet and bake for 5 minutes.

To make the tomato sauce, sweat the onion and garlic in a pan over a medium heat in 1 T olive oil. Add the tomatoes and oregano and simmer until reduced by half. Blend and season to taste.

To make the dukkah spice, reduce the oven’s temperature to 180°C. Place the sesame seeds on a baking tray in a single layer. Roast for 2 minutes. Remove from the oven and set aside.

Place the cashew nuts and hazelnuts on the same baking tray and roast for about 5 minutes, shaking the baking tray occasionally to ensure they don’t burn.

Remove from the oven and mix with the sesame seeds. Place in a food processor with the remaining ingredients and blend until fine. 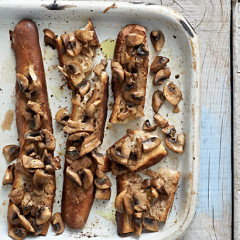 Stir-fry the mushrooms in oliv… 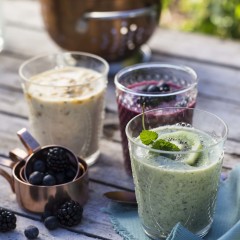 To make the smoothie base, ble… 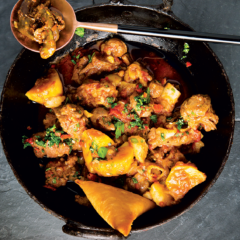 Heat the oil in a large pan, t…