1. Light the fire and leave to burn for 10 minutes. Start cooking when the fire is at its hottest (this will help to seal the meat and caramelise the veggies). I use a quarter of a bag of Woolies’ restaurant-grade charcoal to start the fire, and as it goes, I add another quarter – about 2 kg in total. The nice thing about this charcoal is the potjie balances nicely on it, whereas briquettes cause it to wobble.

2. Cut as much excess fat off the lamb as you can and discard. Toss the shanks in the flour and coat well. Heat a large pot (I use a number 3 potjie) with some oil.

3. Add the onions, carrots, leeks and butter. Keep stirring often until the onions are soft and translucent.

4 Add the tomato purée and simmer, every time it seems the pot is about to burn add a little bit of red wine and stir (this method is called deglazing).

5. Once all the wine is used up and the mixture is a dark, rich brown colour, add the lamb shanks to the potjie. Stir and coat the lamb in the mixture and place the lid of the potjie on the pot. Let the lamb brown for about 10 mins.

6. Add the herbs and spices and mix well.

7. Add the beef stock. If it does not cover all the meat, add water to the pot until everything is covered.

8. Bring the pot to the boil and then simmer, covered, for 2 hours. Meanwhile, make the dombolo.

8. Pour 1 cup warm water into a jug. Add the yeast and allow to foam (about 5 minutes).

9. Mix the flour, sugar and salt. Add the water-and-yeast mixture to the flour mixture, then slowly add more warm water and mix (either with your hands or using a mixer with a dough hook attachment).

10. Once the mix reaches a dough-like in consistency, stop adding water and begin kneading. If you’re using a mixer, mix until it starts pulling away from the sides of the bowl. If mixing by hand, knead for around 15 minutes.

11. Place the dough in a bowl and cover with a damp cloth or clingwrap brushed with oil. Prove until doubled in size.

12. Knock the dough back by punching it a few times, then roll into tennis ball-sized balls.

13. After the stew has been cooking for 2 hours, remove the lid and add the potatoes. Place the dombolo directly on the simmering stew. Cover with a lid and cook for 20–30 minutes over a low simmer.

14. Simmer for a further 30 minutes, covered. Season with salt and pepper. The dombolo is ready when a toothpick pricked into it comes out clean.

Cook’s note: Only add salt to the stew in the last 30 minutes, salt concentrates as it cooks so the later you add it the better. The dombolo need room to rise and room for the steam to circulate or they will not puff up properly.

If you’re using a smaller potjie with not enough room at the top for the dombolo, rather steam the dombolo in a bamboo basket or steamer for about 45 minutes over simmering water and add to the stew just before serving. If you’re in a rush, make the balls smaller to speed up the cooking time. Another quicker method is to place the dough balls in plastic bags, tied closed with a bit of room to grow, then place in boiling water for 30 minutes.

Lesego Semenya aka Les da Chef knows his way about a braai – in particular how to treat that South African favourite, the lamb chop.

Char the onions in their skins… 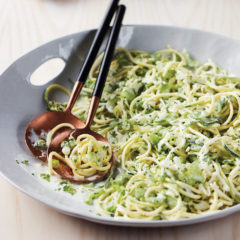 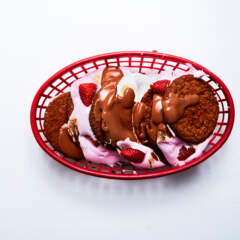 Looking for inspired midweek recipes that are stil

A good Hollandaise sauce can transform the mediocr