Using a pastry brush, paint the insides of 6 ramekins with butter, working from the bases in upward strokes. Sprinkle caster sugar into each ramekin, turning so the sugar coats the inside evenly. Shake out any excess sugar. Chill the ramekins for 15 minutes.

Heat the milk in a saucepan over a medium heat until just below boiling point. In a large mixing bowl, mix the egg yolks, flour, lemon and lime zest and 2 T caster sugar.

Slowly pour the milk into the egg-yolk mixture while whisking, then pour the liquid back into the saucepan, return to the heat and cook, stirring continually, until the mixture becomes thick and velvety. Remove from the heat, add the butter and lemon juice and stir until the butter has melted. Set aside.

In a mixer, beat the egg whites until frothy, then gradually add the remaining caster sugar until incorporated. Beat until firm, glossy peaks form. Scoop out a quarter of the egg whites and mix into the custard. Carefully fold in the remaining egg white mixture using a metal spoon.

Place on a tray and bake for 8–10 minutes, or until risen and light brown. Dust with icing sugar and serve immediately with the ice cream.

Cook's note: The soufflé has a rep for being fiddly – undercook it and you’ll have a soupy mess, overcook it and it’ll collapse. But despite the significant fear factor, making one that’s firm on the outside, moist and fluffy on the inside is a lot easier than you think.

The key to a good soufflé is incorporating air, so be gentle when folding the egg whites into your mixture, you don't want to lose all that air!

Run your thumb around the inside edge of the ramekins before baking to remove any drips - this will ensure that the soufflés rise evenly and straight.

Don't peek while they're baking, keep the oven door closed!

Never forget the most critical element: timing. A soufflé must be served the minute it comes out of the oven. 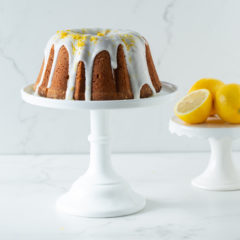 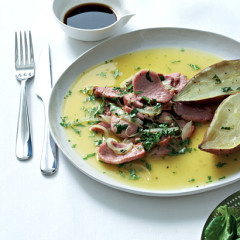 Thinly slice the pork into med… 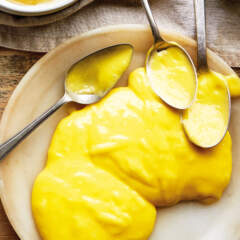