To make the dough, dissolve the yeast in the warm water and allow to stand for 2 minutes.

Add the milk, butter, sugar, eggs, salt and 360 g flour. Mix in a stand mixer using the dough hook at a high speed for 2–3 minutes. Gradually add the remaining flour until a firm dough starts to form, then mix at a low speed for 3–6 minutes until the dough becomes smooth. Place the dough in a well-oiled bowl, cover and allow to rise until doubled in size.

To make the caramel, melt 100 g butter in a pan. In a separate bowl, mix the sugar and cinnamon, then set aside.

Melt the remaining butter, then whisk in the brown sugar and vanilla until combined.

Grease an 23 cm baking dish with nonstick spray – you can either make one large bread or 2 medium ones. 7 Punch down the dough very gently and cut into 4 even pieces. Shape each piece into rounds of approximately 3 cm each.

Dip each piece of dough in the melted butter, then roll generously in the cinnamon and sugar. Arrange in the baking dish. Pour the butter-and-sugar mixture over the dough and bake for 30–35 minutes. Remove from the oven and rest for 15 minutes before serving.

Cook’s note: Make the dough the day before and allow it to prove in the fridge overnight so that it’s ready to bake first thing in the morning. This dough doesn’t go through a second stage of rising so you need to bake it in a dish that has enough space for it to rise. Cover the dough you aren’t working with using a damp cloth to ensure that it doesn’t dry out. While the bread is baking, cover it with a lid or foil if it starts turning too brown on top. 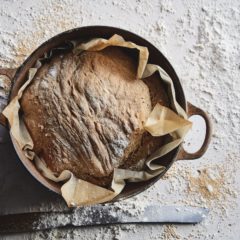 1. Combine all the ingredients… 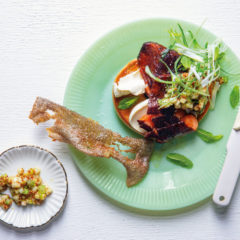 1. Marinate the trout in the s…