Preheat the oven to 180°C. Place the marrow bones in a baking dish and add the stock. Cover tightly and roast for 45 minutes. Remove the marrow from the bones while still warm. Set aside.

Heat the olive oil in a pan and fry the endive halves, cut side down, until golden brown and soft. Add the lemon juice, cover and set aside.

To make the risotto, heat 100 g butter and the olive oil in a heavy-based pan. Cook the leeks over a low heat until soft. Add the garlic and cook for 1 minute.

Add the rice and stir until coated and sticking to the bottom of the pan slightly. Dry fry the saffron in a separate pan to toast slightly.

Start adding ladles of stock, one at a time, allowing it to absorb before adding more. Add the saffron and cook until the rice is al dente. Stir in the marrow. The risotto should hold its shape but should not be chalky or porridgy. Add the remaining butter and Parmesan. Season to taste.

To serve, spoon the risotto into bowls, then top with the sausage meat and endive. Sprinkle with Parmesan. Serve with a rocket salad dressed with extra virgin olive oil and lemon juice.

Cook's note: Milan, the global capital of fashion and design in northern Italy, is also famous for maize-based dishes such as polenta, as well as rice-based dishes, especially risotto. Creamy risotto alla Milanese gets its vivid golden colour and distinctive flavour from saffron, one of the rarest spices on the planet – some of the best is grown on the plains of the Abruzzo region, east of Rome. 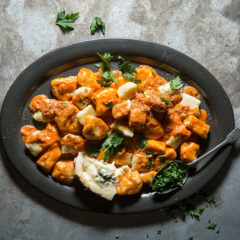 Boil the potatoes with their s… 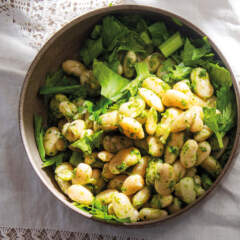 1. Cook the butter beans until… 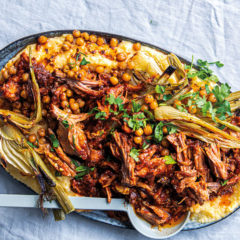