Wash the kale leaves and remove the leaves from the thick stalk. Shake off most of the water, keeping the leaves a little wet.

To prepare the kale, heat the canola oil over a medium heat. Add the kale and begin tossing slowly, allowing the kale to wilt.

Kale doesn’t wilt as much as spinach and takes some extra cooking. After 5 minutes of tossing in the pan the kale should have wilted down but still retain some texture.

.Add the sesame seeds, finely chopped garlic cloves and grated ginger to the pan and combine with the kale. Remove the kale and set aside.

To make the Asian dressing, combine the soy sauce, honey, chilli, sesame oil and rice wine vinegar. Pour the dressing over the still warm kale and toss through.

To cook the salmon, heat 1 T canola oil over a medium heat in a non-stick pan. Portion the salmon into 4 fillets and pat it dry on both sides.

Once the oil begins to smoke, place the salmon skin-side down, applying a little pressure on it for 10 seconds. Allow the skin to brown and crisp up, watching the flesh and only once it turns opaque do you turn it over and cook the other side, for another 30 seconds.

Don’t cook more than 2 portions in the pan at a time and wash the pan before cooking the next 2 portions.

Serve the salmon on a bed of the spicy, Asian kale and sprinkle with fresh coriander and finely sliced spring onion to garnish.

Clement Pedro strikes a balance between rib-sticking fare you can really get stuck into and experimental recipes that take accessible ingredients to next-level status. Clem can do pretty much anything – and so can you with his recipes. 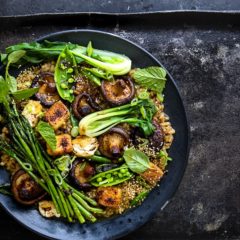 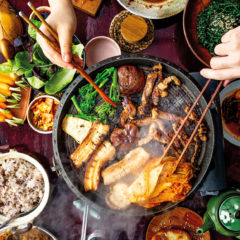 1. Place all the ingredients f… 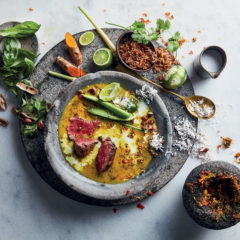 Heat the oil in a large cast-i…

Start your fires 🔥 Braai season is here and so