Use a wooden spoon to thoroughly combine the flour, salt and yeast in a mixing bowl. Add the water and mix for about 30 seconds until a rough, wet dough has formed and all the our has been absorbed.

Cover the bowl with clingwrap and allow the dough to rise at room temperature for about 18 hours (in summer 12–14 hours will do).

Heavily flour a work surface and scrape out the very sticky dough, which will spread into an amoeba-like form. Dust it with flour – just enough so that it doesn’t stick to your hands – and pat into a rough square of about 25 x 25 cm. Spread the olives over the dough and press in lightly. Fold the square into thirds from the one side and then into thirds from the other side to form a putty cube of about 10 x 10 cm (brush off any excess flour as you go). Cover lightly and rest for 15 minutes.

Meanwhile, spread out a tea towel on a flat surface and sprinkle a generous amount of our onto half of the towel – this is to prevent the dough from sticking to the towel.

Delicately brush off any excess flour from the dough, and using your palms, very gently stretch the top layer part way down over the seams visible on two sides of the dough. Using both hands, gently lift the dough onto the middle of the floured side of the tea towel. Sprinkle the top of the dough with a little flour and cover with the other half of the towel. Allow to rise for 2 hours.

After an hour, place an empty heavy cast-iron casserole (with a lid) in the oven and turn the temperature to its highest setting, probably 250°C. Bake the empty casserole for an hour, remove the lid, slide your hand under the towel where the dough is resting, lift up the towel and dough and invert it into the casserole. Shake the casserole to neaten the dough, cover and bake for 30 minutes. Remove the lid and bake for a further 10–20 minutes, or until dark brown. Cool on a wire rack. 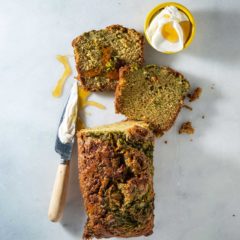 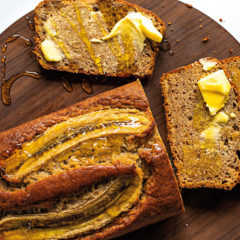 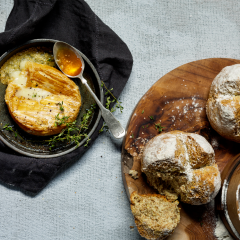