Beat the egg, 1 T of the golden syrup and milk together, before mixing into the dry ingredients, adding more milk, if necessary, until ,the mixture has a smooth consistency.

Grease a 1-litre ovenproof bowl with softened butter and add the remaining golden syrup to the base of the bowl.

Pour in the pudding mixture. Cut out large squares of greaseproof paper and fasten tightly over the bowl.

Place into a saucepan filled halfway with boiling water (and to which the lemon rind has been added) and cook for 1 hour, with the lid of the saucepan on.

Cool slightly before removing the pudding from the bowl with a blunt butter knife. Serve warm, with dollops of mascarpone or hot, runny custard.

Cook’s note: Make sure the water only comes halfway up the sides of the pudding bowl during the entire cooking process.

This is a versatile recipe that makes the most gratifying pudding. For a different take, leave out the ginger and replace the golden syrup with strawberry jam. 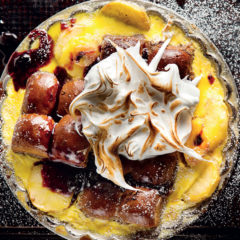 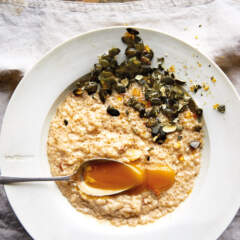 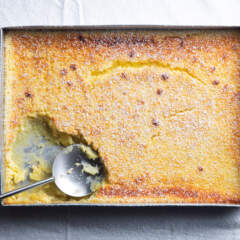 What’s the non-negotiable dish on your Diwali ta Do you call these flapjacks, pancakes or crumpets?

Peanut butter biscuits made with only three ingred

Are you team sweet or team salty when it comes to

Asparagus: do you love or loathe it? Spring is t

Can you believe this almond-butter fudge with a sh

What is the best way to prepare asparagus?