Potato- and cheese-topped puff pastry might sound extremely rich, but it works perfectly with this light veggie broth.

Get the recipe for cauliflower, leek and almond brown-butter soup with potato puffs here.

This side gives a whole new meaning to eggs on toast for dinner. Silky corn soup aside, we’d be happy with the cheesy, eggy toast all on its own – but we strongly recommend you make the soup, too.

Get the recipe for smoky corn soup with cheesy egg toast here.

Tomato soup and grilled cheese might be the OG soup-and-sandwich combination, but this updated version is just as good (if not better). Probably because there’s an whole block of gooey raclette served here.

Get the recipe for potato bread, tomato soup and roasted raclette here.

Prawn toast might not be the first thing that comes to mind when making a midweek soup for dinner, but it’s easier than you think. This is also a great way of jazzing up store-bought butternut soup.

Get the recipe for butternut-and-chicken soup with prawn toast here.

Why serve your toast on the side of your soup when you can serve it in the soup instead? This French-inspired onion soup might not be traditional, but it’s perfect for a mid-winter cooking project.

Get the recipe for French-esque onion soup here.

Ready-made products such as garlic bread and cheese sauce shine in this recipe. They deliver on flavour in half the time – a double win.

Get the recipe for cauliflower soup with cheesy garlic bread here.

Just when you thought haddock chowder couldn’t get any better, Abi goes and serves French toast on the side.

Get the recipe for creamy haddock chowder with French toast here.

Buttery naan will always have a place in our soup-loving hearts, but this paneer-topped version is the quick update we didn’t know we needed.

Get the recipe for curried lentil-and-roast sweet potato soup with paneer naan here. 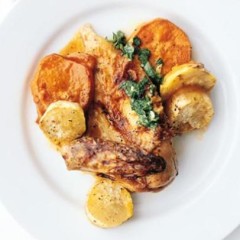 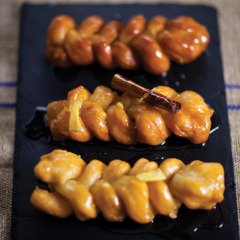 To make the syrup: Over a low … 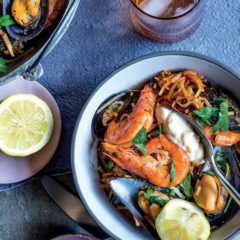 Bring the stock and wine to a …

Want to know the secret to making insanely good hu