Arguably the best thing about Korean food is that it almost always includes all five flavours: sweet, salty, sour, acidic and spicy. The complex flavour combo might strike fear in some of you, but the flavours of Korean food are put together in such a way that they work together like magic. The key is balance.

Without any further ado, ready your chopsticks and learn the basics of Korean eating (and read more in the October 2015 issue of TASTE Magazine).

To get you started, here are 7 Korean pantry staples you need to acquaint yourself with:

GOCHUJANG (KO-CHU-JAHNG):
This fermented chilli paste, often used in kimchi, packs a serious punch. You have been warned…

THE GRILL
You’ll most likely have the option to cook your own food. The grill on your table is hot and fast, so turn your meat frequently.

THE SOUP
Doenjang jjigae, made with soya bean paste, is much loved in Korea. Sundubu jjigae is a delicious tofu-and- chilli stew made with a base of fish stock. Order for the table and share.

THE BANCHAN
These small side servings of crunchy and acidic ingredients cut the fattiness of the meat. Alternate bites of meat and banchan.

THE WRAPS AND SPREADS
Standards include ssam (green leaves for wrapping meat), ssamjang (a paste to spread on meat); and sesame oil and salt for dipping.

And if you want to try a hand at Korean cooking, add these recipes to your cooking repertoire:

If you’re not brave enough to cook Korean food in your own kitchen, here are details for a few Korean restaurants, courtesy of our friends at Eat Out:

In Johannesburg and Pretoria: 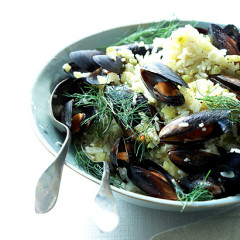 In a wide pan over a medium he…

Not sure what to make for dinner? Try this insanel

These flapjacks by @donnellyabi are so good, you w

Nothing beats the heat like a good ice-cream, espe

Have you gone back to making your own bread in lev

The best thing about peanut butter (other than its

We all love a good peanut butter sandwich, but som

How long do you spend prepping and cooking your average weeknight dinner?