We first spotted this frankly outrageous recipe on Good Housekeeping UK’s Instagram feed. It appears that a legion of fans is making the recipe, so how bad could it be? The original recipe relies on using condensed milk instead of icing to maintain its three-ingredient status but as South African cans of condensed milk tend to be only 385 g, not 397 g, there’s not enough to do this. We recommend making a simple water icing instead of opening a second can, which pushes the ingredient list to four. We also thought blueberries would be a fun addition.

The verdict: This recipe, somewhat surprisingly, delivers a soft, passable loaf cake, that’s actually quite sophisticated in flavour. Oranges, when used whole, are fairly bitter, so despite the condensed milk, it tastes rather grown-up. Our larger gripe is that boiling the oranges, seeding and blending them is actually quite time-consuming and messy. So despite the short ingredient list, this is not a quick-and-easy cake recipe. Rather opt for one of Abi’s one-bowl cakes. We also tried a gluten-free version using an all-purpose gluten-free flour mix, plus baking powder. That, however, we would not recommend as it becomes a little dense and gluey.

The New York Times itself has published recipes for this internet hack, so it’s safe to say it’s gone mainstream! The principle is based on the fact that coconut oil has a very high melting point, so it sets when it hits cold ice cream. In principle, you can use any nut butter, Nutella or chocolate mixed with coconut oil.

The verdict: Five stars. Fast, tasty and sets beautifully as it hits the ice cream. We feel like kids again! Adding dehydrated strawberries and blueberries to white chocolate makes for beautiful colours with a sherbetty flavour.

Nutella supplies the fat, sugar and chocolate elements, which is how this recipe manages to maintain such a short ingredient list.

The verdict: A slightly cakey, rather than gooey brownie. We added ganache, for more lusciousness, plus berries. 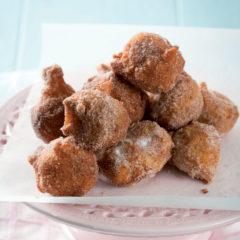 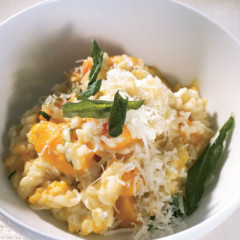 Simmer the butternut in the st… 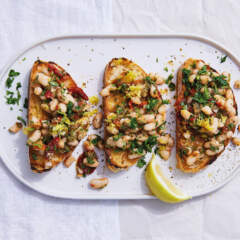 1. To make the dressing, pound…

Shake up your fish supper with Hannah Lewry's game