We have had house guests. My stepson, Wayde, is visiting from London with his girlfriend, Alya – a charming Russian Brit who brings me a box of artisanal chocolates and designer cookie cutters from Copenhagen. I love her.

Wayde has an itinerary of cycle routes, penguin visits and mountain hikes planned. He wants Alya to have all the classic SA experiences – an intervarsity rugby game, skateboarding on the Sea Point promenade, lamb chops on the braai, ribs at the Spur. What a guy.

The two of them complain about England’s pale, insipid watermelon and marvel at the buttery goodness of Woolies’ Gem avocados. Because you can’t buy creamed sweetcorn in London supermarkets, I make them my trashy cheesy sweetcorn soufflé and feel smug about everything SA still has to offer.

I also decide to make them Cape Malay chicken biryani, so Alya can have another classic SA meal. Apparently she “likes a bit of spice”. The thing is, I have never made biryani, and in fact, I still haven’t. This recipe is for a biryani CASSEROLE, something I should probably have paid attention to before launching into it midweek, but no, I throw caution to the wind and dig out the lentils and basmati rice.

I break out two bulk packs of skinless, boneless chicken thighs. Mistake number one. I don’t like cooking without skin and bones, I know it means sacrificing flavour and succulence, but the Salad Dodger has an aversion to chicken gristle (have I mentioned this?) and I’ve sat through too many painful chicken curry experiences to risk it.

Next I decide to show off by dry-roasting and then grinding whole spices, instead of using ground fennel, cumin and cinnamon, as per the recipe. Mistake number two. I’ve said this before: when one is cooking something for the first time, and when one is cooking for other people, one should always ALWAYS follow the recipe.

Not me. I carry on undeterred, ignoring the specification to cut the potatoes into 1 cm dice – it’s going to be in the oven for an hour, I think, I don’t want them to turn to mush. Mistake number three. The recipe doesn’t specify whether the “casserole” should be cooked with or without a lid, at which point, instead of phoning a friend (aka Abigail), what do I do? I put on the lid. Mistake number four.

Supper is not my best work.

Traditional biryani takes time and some degree of skill, it involves patiently cooking the rice, browning the chicken and cooking each separately before layering them and steaming the whole dish (lid on) so that the rice turns out fluffy and the chicken is succulent but still golden. This is a quick midweek version, which, by definition is not traditional, so the rice was always going to be stickier. Mine is a LOT stickier. Additionally, thanks to my decision to grind my own spices (with a toddler eating a dippy egg nearby) it also features bits of cinnamon stick and some unmistakably undercooked potatoes.

“What are the chewy bits?” asks the Salad Dodger. “Lentils,” I say. 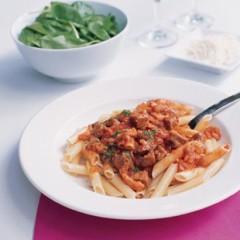 Pasta with stir-fried lamb and tomato

Stir-fry the lamb in batches i… 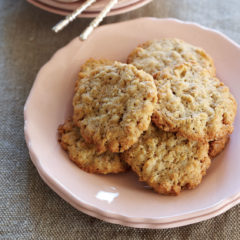 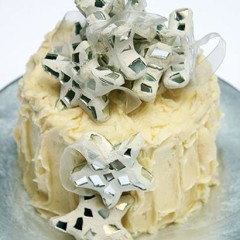 Cut up the fruit and coat with…