DID YOU KNOW?
The oceans’ mollusc family is huge – there are some 80 000 species, many of which have been enjoyed by everyone from coastal hunter-gatherers to the poshest politicians in Paris. In South Africa we don’t have much choice in terms of fresh molluscs, but fishmongers are increasingly trying to satisfy a growing demand and even the larger Woolworths stores now stock oysters. You can certainly find all of these frozen at the better fishmongers, and although the taste and sometimes texture is not quite the same as when they are cooked fresh, they are still so worth it.

MAGIC MUSSELS
Mussels are good value for money and can be added to just about any dish, from Asian curries to classic Italian pasta sauces. They hold their own really well, just be sure not to overcook them as they will become tough and dry.

Buy fresh mussels in their shells, making sure they are closed (give them a sharp tap and if they don’t close, don’t buy them), also that there are no cracks and they are as fresh as possible (ask the fishmonger). If they’re not yet cleaned (wild mussels normally aren’t whereas farmed mussels are), simply rinse them under running water to remove any grit and sand and, using a small knife, carefully pull the beard away and discard. Fresh mussels can be stored in the shell in the coolest part of your refrigerator for five to eight days, covered with a damp cloth.

The simplest way to prepare mussels is to steam them over medium heat for 5-7 minutes or until the shells open. Or heat some garlic cloves in olive oil, add the mussels and wait for them to open. They will release juices, which are great as a base for a sauce. You can also simmer them (in a covered saucepan) in a white wine, cream and garlic sauce or fish stock for 3-5 minutes. If any shells haven’t opened, discard the mussel as it may cause food poisoning.

SENSATIONAL SCALLOPS
Scallops are perfectly round little gems that have earned themselves a glamorous reputation among fine diners. They should be creamy white in colour and nice and firm to the touch. They’re hard to find fresh in South Africa, so have a look in the frozen section.

Defrost them an hour or so just before cooking so that they have the best chance of maintaining their texture and structure.

Scallops should be eaten hot, immediately after they have been cooked. They’re sublime simply seared or flash fried in a hot pan for about a minute a side. They’re also gold when done over smouldering coals on the braai. Because they are slightly sweet, pairing them with salty bacon makes for an unforgettable dish. Simply wrap them in bacon and grill 3-4 minutes a side until the bacon is crispy. Serve with cauliflower puree.

COOL AS CLAMS
Clams are not often used in South African cooking but they are delicious. Like scallops they’re difficult to find fresh. Selected fishmongers will have them frozen, and you defrost them just as you do scallops – about an hour before cooking. Once defrosted, prepare them immediately.

Clams are small and delicate when compared to mussels, but they cook in the same way, maybe just for a minute less time. They’re delicious piled high on a tangle of fresh pasta, such as in the classic Italian spaghetti vongole that’s flavoured with garlic, parsley, salt and pepper.

ODE TO OYSTERS
Oysters are best served for special occasions only; they’re so much more beautiful when you don’t have the luxury of eating them every week.

Oysters in the shell should be live when you buy them. Do the tap test to see if they close and if not, don’t buy them. In store they should be presented on ice and if you knock on the shell it should make a solid sound, not a hollow one. Never buy an oyster in a cracked shell as this is a sign it may be contaminated.

Shuck them and store them on ice in a cooler box until you are going to prepare them, which must be the same day to ensure they are full of flavour and freshness. If not, store them in the fridge under a wet towel for a day or two.

Eat oysters icy cold and so fresh that you can still taste the sea. We love them the good old fashioned way with a drop of Tabasco, a squeeze of lemon and a crack of freshly ground black pepper. Also try them in shot glasses spiked with tequila or with a chilli salsa. 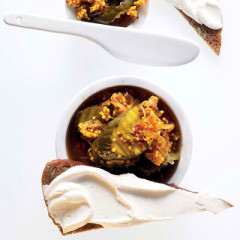 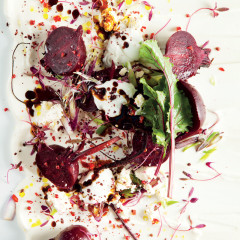 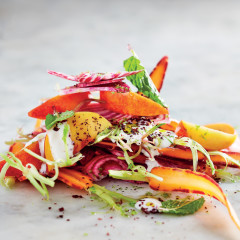