Ntiyiso Mkhabela grew up in Giyani in Limpopo and her memories of celebrations always involve traditional dishes. Now an administrator by day, food photographer and food cookie entrepreneur by night, she’s passionate about celebrating the food of Vatsonga, and is particularly inspired by the recipes of her mother and late grandmother – many of which featured peanuts.

“As a child the first sign that we were going to make tihove was my mom washing the big traditional mortar and pestle. It would be followed her friend coming over. As soon as she arrived, they would take turns grinding the nuts and using the sieve to get a fine powder. The powder is used not only in this recipe, but in many others. We are also allowed to help with the grinding. I always ate the least since I was not a fan of crushed nuts, but as this was a tradition I grew to enjoy tihove to the extent that whenever we went home during varsity vacations, my mother would make this dish for us. I only learnt to cook it in my thirties in an attempt to leave a piece of my culture for my daughters. Whenever we have events like a wedding or family gathering, it’s a given that we will eat tihove.

We sometimes host preachers from all around the world. My mother makes sure that one day during their visit they are given a taste of Vatsonga. Tihove is always a start of the meal. We would also make hard body chicken or traditional chicken. We do not consider the broiler chicken when cooking traditional foods.

Peanuts are also used in lots of other traditional dishes. Xigugu is made using a mix of toasted peanuts and toasted corn. It’s similar to peanut butter but it’s hard and can be eaten on its own. Xingwimbi is pumpkin and crushed nuts with a pinch of salt and xiendla hi vomu, which is similar to tihove but the grains are wet grains, not dried, that come straight from being harvested. Xiphaswa is green butternut leaves or baby marrow leaves with nuts. This is eaten regularly.”

Another peanut-focused dish that the chef and activist recently reimagined in cake form is mashakada.

“Mashakada is a dish made using wild or brown rice, which is seasoned with a generous portion of peanut butter. Don’t think of rice AND peanut butter combined, think of rice with peanut butter deep within its soul. The peanut butter cooks through and takes on an entirely different flavour profile and texture leaving you with rice that forms morsels that easily fetch gravy or relish. Even more brilliant, you can eat mashakada on its own, with a cup of tea, as a dessert or a snack. It’s a flavour that’s not loyal to one food category, not sweet, not savoury, just mashakada.”

Tshidzimba is a Venda dish, made using whole maize, mbambara nuts and peanuts, then creamed with more peanut paste. “What nostalgia! I had it for dinner last night, then again for breakfast this morning, leftovers are my thing. Meals like this are great all-in-ones: protein, carbs, fat and the good old taste of home.”

READ MORE: The indigenous South African ingredients you really need to know about

Mogau grew up in Limpopo, but unlike Ntiyiso, comes from a Pedi background. Her family ate peanuts crushed into morogo, and mopani worms cooked with peanuts. “There’s a recipe in my book for this dish, but I use peanut butter instead of crushed nuts.” The dried mopani worms are soaked in boiling water and vinegar, cooked, and then fried onions and peanut butter are added. 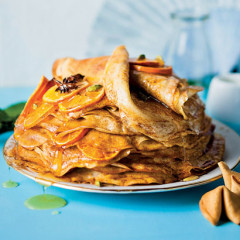 Place the Clemengold coulis an… 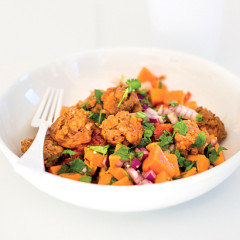 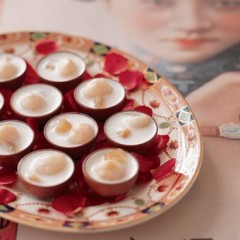 Submerge the gelatine leaves i…