Place the gammon in a large saucepan, cover with water and boil until the gammon is heated through, about 10 to 20 minutes.

Remove from the water, pat dry with kitchen paper and score the skin using a sharp knife. Heat the marmalade and sugar in a small saucepan until melted. Brush the gammon with the mixture and roast for 1 hour, basting regularly, until brown and crisp.

Serve with the poached white peaches.

To make the poached white peaches, heat the sugar and water in a small saucepan and bring to a boil. Add the peaches, cover and poach for 5 to 10 minutes, or until the skins start to peel and wrinkle.

Remove from the syrup using a slotted spoon. Peel when cool enough to handle. When ready to serve, dip the peaches in the poaching liquid to moisten.

Hot tip: See the behind-the-scenes photographs of the TASTE 2012 Christmas shoot on our Facebook page.

Do your gammon in the Weber instead.

Simply prepare the grid for indirect cooking over a medium heat and grill the boiled gammon, skin side up, with the Weber lid on for an hour, or until crisp-brown on the outside and succulent inside.

*Pick up your Ready-to-Eat Bone-in Gammon from Woolworths. Available at selected stores for the Christmas 2012 season. 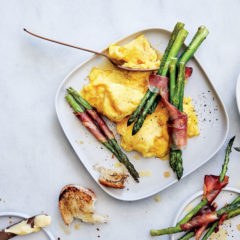 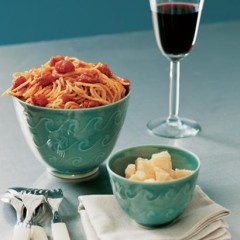 Gently heat the oil with the g… 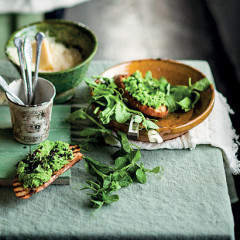 Boil the peas in salted water.…

Alcohol sales are banned (again), what are your wine stocks looking like?