Head away from the tourist bustle to explore Pagrati, a middle-class residential neighbourhood that’s a ten-minute walk from central Syntagma Square. Pagrati’s streets are home to some of the city’s best restaurants, tucked under apartment blocks amid bitter-orange trees. Spondi serves two-Michelin-star French cuisine, but Pagrati’s real gems celebrate Greek cooking at its best.

To Mavro Provato (The Black Sheep) is a mezedopoleio (meze restaurant) on Arrianou Street popular with Athenians for its well-priced, imaginative menu of small plates. Take a table outside and order the Turkish-inspired hungkiar begendi, tomato-braised veal on smoky charred eggplant puree, richly blended with béchamel. Also don’t miss the best pan-fried beef liver in the city.

Cookoovaya, behind the nearby Hilton, is where to head for dinner when you want to impress. It’s the playground of five of the city’s best chefs, whose seasonal menus and modern, classic take on traditional Greek cooking warrant the local furore around the restaurant’s opening late in 2014. Try the charred octopus with fava puree and vinegar glaze, and the light spring lamb in season. Everything is made in-house, from the bread to the ice cream and pasta.

Karavitis Taverna is an old-school favourite that’s been in the same spot since 1926. Spend a warm evening eating crispy lamb ribs, ordered by the kilo, with your fingers in the whitewashed garden. Return as the weather turns chilly, take a seat in the cosy interior next to the enormous wine barrels, and order the meatballs or any of their “home cooking” specials.

Funky Gourmet, in a minimalist neoclassical house in Keramikos, was awarded a second Michelin star in 2014 for its witty, molecular gastronomic interpretation of Greek classics. Athenian owner-chefs, Georgianna Hiliadaki and Nick Roussos have both spent time at El Bulli. The degustation menu includes snails with fresh black truffle, The Silence of the Lamb (sheep’s brain), and their take on pastitsio (a baked pasta dish of ground mince in béchamel sauce).

CTC, only opened in 2014 but 28-year-old owner-chef Alexandros Tsiotinis is drawing the crowds. The 2015 S. Pellegrino Young Chef of the Year in the Mediterranean for his “Cretan Salad in a Pot” offers a six-course degustation “trip” or an eight-course “voyage”, showcasing his modern urban gastronomy with dishes such as root salad and Greek bread ice cream, or slow-cooked rooster with miso mousseline and chicken liver parfait.

Varoulko has moved to chef Lefteris Lazarou’s old neighbourhood Mikrolimano Marina – a location opening onto the water next to Piraeus Yacht Club. It’s a perennial local fine-dining favourite for its seafood: moussaka with minced crayfish and the freshest grilled bream. It also boasts a Michelin star.

Who wants to live forever?

Journalist Nastasya Tay also visited the Greek island of Ikaria, a UNESCO-designated Blue Zone to discover the dietary secrets that might explain why the locals often live to be 100 or more. Find out what she discovered in the November issue of Woolworths TASTE, on sale at Woolies. 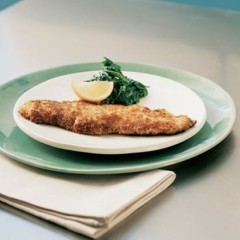 Bash the schnitzels between sh… 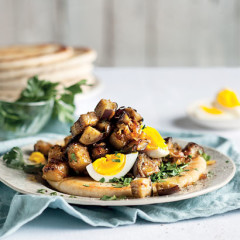 Cut the brinjal into cubes. He… 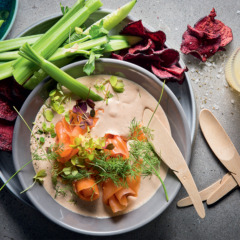