Why all the ale? Good question. Lager and ale are two different species of beer, differentiated by yeast…

Ales are generally fermented at high temperatures using top-fermenting yeasts (it literally rises to the top), which results in a few things – mostly far more complex flavours. So ales can be sweet and sour or fruity and tart at the same time, with all sorts of “hints”, from Christmas cake and banana bread to elderflower and chocolate.

Lagers are brewed with bottom-fermenting yeasts, doing their thing at much lower temperatures and matured in cold rooms for longer periods of time (lager means storeroom in German). The benefit is generally a smoother and more mellow beer than your average ale, typically described as “refreshing and crisp”, which is just what you want in the heat of Africa – or Australia.

So, in a nutshell, if you’re a craft brewer, you can make really interesting tasting ale (albeit quite “hoppy”) really quickly, or you can take twice as long to make a nice, friendly lager that tastes quite a lot like the next guy’s lager. For most, a no-brainer. QED.

Imagine a Cape Winemaker’s Guild member getting into craft beer. That’s what happened on Dwarsrivier, the ancestral home of the Nieuwoudt family. David’s Sauvignon Blanc may be legendary but this beer, brewed together with Alex and Tammy Nel, using spring water on the farm and inspired by the poetry of C Louis Leipoldt, is a thing of rare beauty: multi-layered, complex, pefectly balanced and utterly delicious. Just like his wines. To get there, you’ll drive 250 km from Cape Town, the last 50 on dirt, but at least there’s the family-owned Sanddrif self- catering cottages waiting on the other side.
Motto: “Time to take your taste buds on a road trip.”

More often than not, there’s a chalkboard outside the door of this microbrewery/ bar in the heart of the Swartland winelands that says it all: “Every loaf of bread is a tragic story of grains that could have become beer, but didn’t… 10 success stories inside!” Their cheeky Tears of the Hipster is a fruity concoction with a prickly pucker, but there’s a good reason. According to legend: the brewmaster once told some hipsters that his craft beer was not for them. They were so sad they cried and he collected the tears and used it for a heady, hoppy, tattoo-free, clean-shaven, Yankee-style ale. Motto: “Pure beer performance.”

Another example of grape gurus turning their attention to grain, this brewery is a collaborative effort between Eric van Heerden of Triggerfish fame and the Stofberg wine family whose Mia Chenin Blanc is the best-value sushi wine of in-the-know Capetonians. They’ve set up shop at the Ou Stokery, home to the wine estate and restaurant and, soon, a taproom and gin bar. The Thirsty Elephant is a tribute to the pioneers that used the animal highways when they discovered the Breede Valley and the ‘hybrid’ is the result of using ale yeast to create complexity.
Motto: “Only dead fish go with the flow.

When he started making beer in Struisbaai eight years ago, Fraser Crighton definitely had the southernmost craft brewery in SA – and he can still make that claim, even though his operation has become part of the “book-ahead-to- avoid-disappointment” Black Oystercatcher Wine Farm, tasting room and restaurant 30 km inland. He makes Pilsner, stout and ale (sold in unusual paper wrapping) but for me, the unfiltered, German-style Weizen (wheat) is the winner: It’s zesty and refreshing, and just one more reason to allow an extra day in your itinerary when you’re heading towards Africa’s bottom.
Motto: “There’s something different about Fraser’s Folly…”

Local couple Hugo Roux and Elmien Gotsell started home-brewing in 2014 and they’re still at it, mixing up a variety of excellent elixirs in an historic old fisherman’s house in the heart of town. The award-winning Moedersmelk alone is worth a visit next time you’re tripping up the West Coast. A seriously complex grain bill opens up caramel and dark chocolate flavours and, together with the addition of vanilla pods in the fermentation process, creates something distinct and delicious. The style is traditionally called milk stout, but as Hugo says, “Milk
in beer? Man, that doesn’t seem right!”
Motto: “Local is lekker; come wrap your talons around a cold one.”

Yes, Franschhoek is a blue- blood vino valley, and that’s precisely why you have to love a relaxed yet classy microbrewery opening doors slap bang in its malolactic middle. The FBC is all about people: a joint venture between ex-pat locals, Alex McCormack and Frank Rodriguez and one of Franschhoek’s superstar sons, Reuben Riffel. Together with brewmaster Olaf Morgenroth and chef Nick Oosthuizen, they’ve put together a concept called Tap | Eat, offering a great day out without having to use a spitoon. You can do food and beer pairings, enjoy a meal or just gulp down world-class beer. For me, the Orange Pale Ale is next-level.
Motto: “Hand-crafted, world-class beer.”

Toast isn’t just a well- rounded, slightly citrussy ale with a hint of crustiness – it’s a social-consciousness movement. Back in 2015, English environmentalist Tristram Stuart, inspired by a simlar project in Brussels, decided to raise awareness (and money) for food security by brewing beer from bread waste. In 2017, the SA project launched as a collaboration between Devil’s Peak Brewing Company and Knead bakery, with Soil for Life as
a beneficiary. There’s at least a slice of unsold bread in every bottle and you can sample it at the taproom in Salt River.
Motto: “Bread shouldn’t be wasted and neither should you.”

The main reason to get excited about dropping into this sleepy little dorpie was always Richard von Geusau’s awesome chocolate. Then along came the Old Potter’s guest house and its on-site brewery. The balcony on the main drag through town is properly inviting and visitors are always welcome to stop for a dop, including their entry-level ale. It’s a spicy ode to visitors from the big smoke, made from locally sourced Overberg barley that screams out for something seared on coals. Also, since beer is 98% water, they start with an unfair advantage – see below.
Motto: “Made from fresh mountain spring water”

Brandon de Kock is a writer, speaker and photographer. He is the co-author of the book cook.better in which he shares his knowledge of years researching the culinary world. 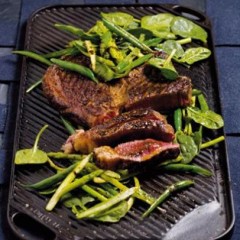 Rub the steak in the spices an… 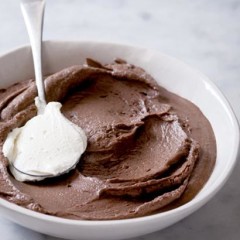 In a glass bowl over a saucepa… 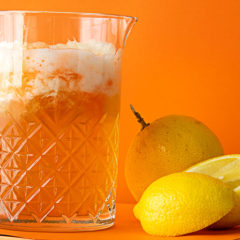 Combine all the ingredients an…