What is Yom Kippur?

One of the most important days in the Jewish calendar, Yom Kippur is the day of atonement that follows the new year. The day is spent fasting, from sundown to sundown, as a way of reflecting and asking for forgiveness for any sins. Following a service at shul the night before, the fast is meant to encourage reflection on the past year and allow for setting intentions for the coming one. We chatted to a few Jewish chefs and restaurant owners to find out how they observe this holy day.

Tracy Klass, owner of A Taste of Klass

How did your family celebrate Yom Kippur? Did you do anything special to prepare for the fast, for example?

We don’t do anything special other than take it quite easy during the days between Rosh Hashanah and Yom Kippur.  After all, they are days of reflection.  We generally make sure to increase our water consumption a few days before the fast, though.

How did you break the fast? Were there any particular foods you always had?

We  always have chiffon cake and bulkes and a cup of tea.

Get the recipe for chocolate babka here.

What does your Yom Kippur menu look like now? What are some of your non-negotiables?

I don’t think the menu has changed too much over the decades.  In fact, I know it hasn’t – chiffon cake, bulkes, bubke and teiglach (a sweet sticky biscuit) with loads of tea and soda water or cooldrinks.  Followed by a very simple meal of cold meat and salad.  After fasting for so long we find that we want simple food.  What has changed for us is the number of people, we now have just the immediate family rather than a large crowd.

How did your family celebrate Yom Kippur?

Yom Kippur was a big deal in our family growing up. In Israel, the country pretty much shuts down on Yom Kippur and for my parents living so far away, it was important to keep all the traditions and feel connected to their homeland. Before the fast would start, we would come home earlier than usual and prepare, making sure to stay as hydrated as possible during the course of the day. We would have a light meal together in the late afternoon, which consisted of chicken soup, chicken casserole, rice and salad. We would then get ready for synagogue, drive there but walk home together at night. The next morning, I would take a leisurely walk along the promenade with my mom to synagogue and spend the whole day there, which made fasting easier for me. As a teenager during the afternoon break, I would hang out with a big group of friends from other synagogues in the area.

Get the recipe for chicken soup here.

How did you break the fast? Were there any particular foods you always had?

Breaking the fast in our family is quite different to the way others in South Africa do it. We would meet at home after synagogue with a few close family friends to have coffee and sponge cake, and maybe some borekas. Then we’d go out to a restaurant for pizza and salad. My parents did it this way so that the fast day could be a day where we could focus on what Yom Kippur actually is (a day of atonement), rather than on preparing for the breaking.

What’s one thing you make during this festive time?

Our chopped liver. In the deli we serve it with bagel chips, but nothing beats spreading it on kichel – a traditional Jewish biscuit coated in sugar. I know it sounds like a weird combo, because it definitely is, but it works. I even like to throw a bit of chrain on top, which is pickled horseradish with beetroot.

Get the recipe for chopped liver here.

What is one of your favourite food memories from this time of year?

One of the key ingredients in chopped liver, as well as in many traditional Jewish recipes, is chicken schmaltz – rendered chicken fat with onions added. These days, most schmaltz you find in stores is just vegetable fat with flavouring added. We, however, prefer to stick with tradition and make ours in-house using free-range chicken skin. The first time I ever made real schmaltz was an illuminating experience. It starts with adding the chicken skin to a pan and slowly rendering the fat without any seasoning, so it isn’t the most pleasant thing to cook. The onions are added after about an hour. I’ll never forget that moment. As I added the onions to the pan, the room was filled with the most appetizing and familiar aroma. It took me straight back to being a child and arriving at my grandparents’ house for festive dinners. My grandmother was a wonderful cook and a true balaboosta. She would make everything from scratch with recipes that had been passed down to her from her mother. Sadly, she passed away many years before I was able to learn her recipes. So unlocking some of her secrets and creating that sense of nostalgia has always been a source of pride and inspiration. I like to think she would approve of our chopped liver. 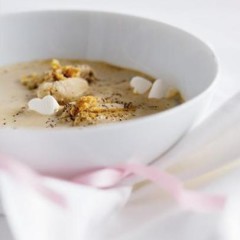 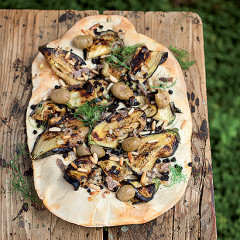 Place a pan over a medium to h…