Sift the flour, baking powder and salt into a mixing bowl and set aside.

In another bowl, whisk the sparkling Rosé and milk. the mixture will appear curdled.

Cream the butter and sugar using an electric hand-mixer until pale and fluffy.

Add the food colouring to your colour preference and mix well to create a uniform colour.

In a separate mixing bowl, beat the egg whites until foamy, then add the cream of tartar. Continue beating until stiff peaks form.

Gently fold the beaten egg whites into the batter 1⁄4 at a time, then pour into the cake tins.

Bake for 45 minutes, or until a skewer inserted comes out clean.

Allow the cakes to cool slightly before removing them from the tins and placing on a wire rack.

To make the cherry meringues, reduce the oven's temperature to 100°C. Beat the egg whites until foamy using an electric mixer, then add the cream of tartar. Beat until stiff peaks form. add the sugar, a little at a time, while beating the egg whites at a high speed. Once the last of the sugar has been added, the mixture will appear smooth and glossy.

Using a paintbrush, paint 4 evenly spaced stripes of pink food colouring down the inside of a piping bag. turn the right way round, then scoop the meringue mixture into the piping bag and tie a knot at the end.

Pipe onto a silicone baking mat and bake for 20–30 minutes, or until completely dry.

To make the pink meringue icing, beat the egg whites and other ingredients, except the food colouring, using an electric mixer in a double-boiler. Beat until stiff peaks form.

Add the food colouring and beat once more.

To ice the cake, place the cakes on top of the other and ice with the pink meringue icing, covering the sides and top. decorate with the cherry meringues before serving. 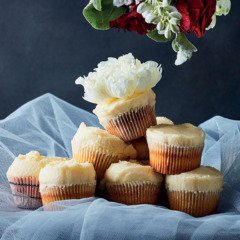 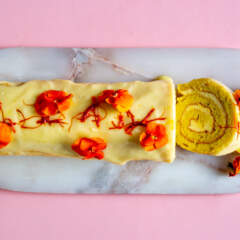 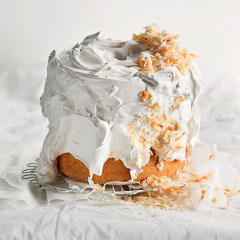