Break the chocolate into small pieces and melt with the butter and coffee in a large heatproof bowl set over a pot of barely simmering water. Stir occasionally until all the chocolate has melted.

Once the chocolate has melted, remove from the heat and allow to cool slightly, about 5 minutes. Whisk the sugar into the melted chocolate using a balloon whisk until the mixture darkens, becomes glossy and the sugar has mostly dissolved.

Sift in the flour and bicarbonate of soda and whisk until incorporated. Add the eggs and vanilla and whisk. The batter will turn a lighter, shinier shade of brown once the eggs are incorporated. Do not overmix.

Divide the batter between the two prepared cake tins and bake for 50 minutes to 1 hour. The cakes are ready when the top has formed a solid, hard crust.

Remove from the oven and allow to cool for at least an hour before removing from the pans. Cover the cakes in cling wrap and allow to rest for at least a day and a maximum of three days. Repeat the recipe four times to create the eight cakes required.

To make the chocolate icing, whisk the butter lightly in a large, deep bowl using an electric beater. Add the cocoa powder and whisk until combined. Add a third of the icing sugar and a third of the milk and whisk. Keep adding both icing sugar and milk until a smooth, thick icing forms. You might need a bit more or less milk depending on the brand of icing sugar used. Place the icing into two large disposable piping bags and set aside. Chocolate icing will stain fabric piping bags.

To make the caramel drizzle, place the Caramel Treat into a deep bowl and whisk until smooth. Scrape the seeds of the vanilla pod into the caramel and whisk briefly. Scoop the caramel into a disposable piping bag and set aside.

To make the chocolate truffles, break the chocolate into small pieces and melt with the cream and Amarula in a large heatproof bowl set over a pot of just simmering water. Do not allow the water to boil. Stir until the chocolate has melted, then remove the bowl from heat. Whisk in the icing sugar until fully combined, then cover the mixture with cling wrap and chill until set (3–4 hours). Remove from the fridge and, using an ice-cream scoop, scoop out the mixture, roll into small balls and coat in cocoa powder. Try to keep the truffles similar in shape and size – half the size of a golf ball.

To assemble the cake, start by selecting a sturdy cake platter. Once this cake is assembled, it is very difficult to move, so assemble straight onto the intended serving plate/stand. Remove the cling wrap from the cakes and ensure the icing is at room temperature. Place one cake onto the cake plate/stand. Pipe a generous amount of chocolate icing onto the cake, ensuring that most of the top is covered with at least 5 mm of icing. Pipe a double ring of icing around the outer edge (as the cakes pile up, some of the icing will squish out, creating a beautiful decadent look). Place the next cake on to the iced cake with the crust facing down and the bottom facing up. Repeat the icing process and place the next cake crust-side up on to the icing. Repeat the process until all the cakes are stacked and iced. Keep the cake tower as straight as possible, checking from every angle after adding each layer. Once all the cakes are stacked and straight, drizzle over the caramel drizzle. Allow some of the caramel to run down the sides. Finally, stack the chocolate truffles on top of the caramel layer. Dust the whole cake lightly with cocoa powder and serve. 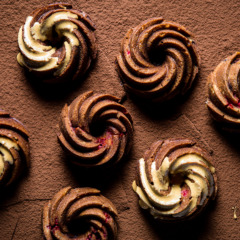 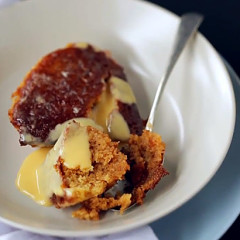 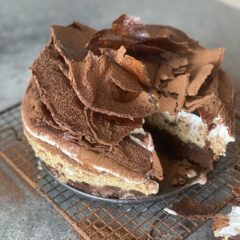 1. To make the chocolate cake …